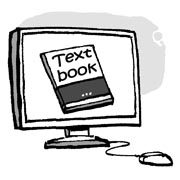 A textbook is the basis of instruction for a student and the beginning point in education. At the same time, a textbook is a mirror of the times.

In 1895, King Gojong ordered the publication of a modern textbook, “Elementary Reading Book for Korean Citizens.” The book begins with an introduction of the kingdom: “Joseon is a monarchy in Asia. Geographically, it is a peninsula that stretches from the northwest to the southeast. The climate in the northwest region is cold, but the southeast region has a warm climate, fertile land and abundant resources.” It was printed on hanji, or traditional Korean mulberry paper, and a large font was used for both the Korean and Chinese characters. It looks just like a Chinese classic.

The textbook also reflects the circumstances of the period. The second paragraph states, “There are hundreds of countries in the world and many of them are independent. Joseon is also one of them.” At the time, Joseon was being pressured by the Japanese Empire and Western powers to open, so the textbook urges people to acknowledge the importance of sovereignty and independence. The textbook includes an introduction of Western civilizations in addition to information on Korean history.

One hundred and twenty years after the publication of Korea’s first modern textbook, we are about to see the paper textbook disappear. By 2015, digital textbooks will be developed for all elementary, middle and high school subjects. The curriculum, instruction, problem sets, references and multimedia resources are to be stored in an online server that can be downloaded to a personal device. It is a natural progression in the era of digital technology and e-books.

The problem we face now, however, is an exaggerated trust in digital education. Some people wrongfully assume that the quality of academic activity will improve with the use of multimedia digital material instead of conventional textbooks. However, without a teacher’s guidance, the impact of digital textbooks may fall short of expectations. There is a risk that digital textbooks will only aggravate addiction to the Internet among the young, when 12.8 percent of students are already suffering from this condition.

The best way to simultaneously nurture intelligence and emotion is to alternate between digital and analogue methods.

A digital textbook is merely a vehicle for instruction and cannot be the goal of education by itself. What matters is the content of the book and the way it is taught. Therefore it is up to the teacher to provide students with smart instruction that makes use of, but does not depend solely on, technology.