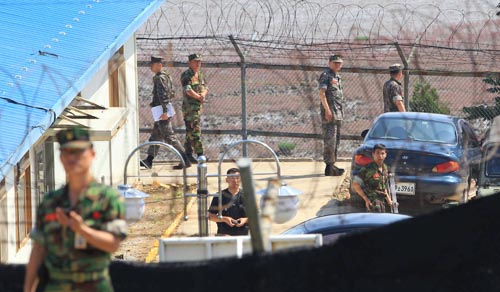 Marines move about the Marine base on Ganghwa Island yesterday as authorities investigated a shooting spree that left four marines dead and one injured on Monday. The shooter was injured during the incident. [YONHAP]


The 19-year-old marine who fatally shot four fellow soldiers and wounded one was a psychologically troubled young man who felt that his victims ganged up to deny him the respect he deserved as an officer.

“I don’t want to live in this [expletive] world,” read a note found in Corporal Kim’s locker after the massacre. (The military has not released Kim’s full name.) Kim tried to blow himself up with a hand grenade after the shootings but failed, and is recovering in the hospital.

Kim and all of his victims were doing their 21-month compulsory military service.

According to military officials yesterday, Kim showed signs of schizophrenia when he was screened for compulsory military service but was thought to have “become better” during initial training and before he was posted at the base near the border with North Korea on Ganghwa Island, where the shootings took place.

Kim had a counseling session with the base commander two weeks before the shooting occurred to help him adjust to his life in the Marines.

But Kim’s adjustment obviously was not going well.

According to the military, Kim told them from his hospital bed that the other soldiers refused to respect him, and they were led by one of the victims, Lance Cpl. Kwon Seung-hyeok. He said he was bullied.

“They didn’t treat me like a senior soldier,” Kim told military investigators in writing. He is unable to speak because of injuries from the hand grenade. “Kwon Seung-hyeok led the other subordinates into not giving me the respect I deserved.”

Kim awoke Monday around 4:20 a.m. and had breakfast and played ping-pong with another Marine before going for a nap at 6:50, according to Colonel Kwon Yeong-jae, head of the central investigative group of the Marines.

After Lee and another staff sergeant left the room, Kim slipped into a hallway and broke into a gun storage cabinet and pulled out a K-2 rifle.

With gun in hand, Kim then broke into an ammunition locker inside the situation room and took 75 live rounds, two blanks and one hand grenade.

Around 10:30, Kim had a brief chat in the barracks with soldier Jeong Jun-hyeok. Apparently he had hidden the gun and ammunition.

Kim told Jeong, “I want to kill Kwon Seung-hyeok,” the soldier he believed was behind the bullying. Kwon was older than Kim, according to the Defense Ministry.

Jeong told military investigators Kim had a flushed face, couldn’t keep his balance and alcohol could be smelled on his breath.

After the brief encounter, Kim went outside the sleeping quarters and fatally shot Corporal Lee, who was near a phone booth outside the barracks. Hearing two rounds fired, the staff sergeant ran from his post and upon discovering Lee, called 119 at 11:42 a.m.

Inside the barracks, Kim fired at Staff Sergeant Lee Seung-hoon, then made his way into the sleeping quarters, where five Marines were sleeping, including his alleged tormentor, Kwon Seung-hyeok. He fatally shot Kwon, followed by Park Chi-hyeon, who was sleeping on the other side of the room.

New recruit Kwon Hyeok, who was sleeping next to Kwon Seung-hyeok, woke up and saw Kim pointing the rifle at him. Acting quickly, Kwon pushed Kim out of the room and grabbed the muzzle of his rifle, which discharged. Kwon got a bullet through his knee.

After shoving Kim out of the room, Kwon locked the door to the barracks where two other soldiers were unhurt.

Kim ran toward a storage room, bumping into the lieutenant in charge of the entire post, to whom he blurted, “I’m sorry.”

The lieutenant had been rushing toward the gunshot sounds. As he came upon the shot soldiers, everyone heard the blast of Kim’s hand grenade as he tried to kill himself. A second emergency call was made at 11:56 a.m. by the staff sergeant.

The military has acknowledged that security of the ammunition locker was lax. Several bottles of soju were also found in the barracks, which are being scanned for fingerprints and other data.

Kim has been hospitalized and sedated, which he initially fought against. According to one military investigator, Kim had pulled out intravenous needles and shoved medical equipment away, refusing treatment. Several military officials said the concussion of the grenade blast has taken away his ability to speak.

Families of the four dead soldiers are grieving. Corporal Park’s birthday was yesterday, said his father.

“He was a good son to his parents,” said Kwon Hyeon-gu, father of Kim’s alleged antagonist, Kwon Seung-hyeok.

“He told his older brother during one of his breaks that one of the soldiers there had been picking on him. The lieutenant told us [Kim] was abnormal ... I don’t know why nothing was done about him.”