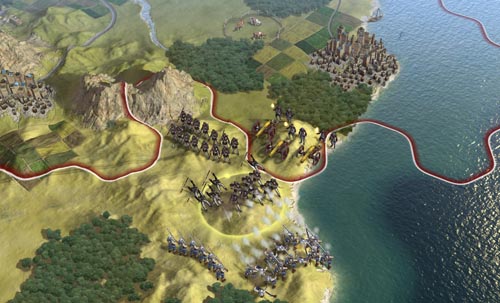 This screenshot of Civilization V shows how characters form a village.


NEW YORK - Long before “FarmVille” there was “Civilization,” the iconic computer game in which players build a civilized world over thousands of years. Now, the game’s designer, Sid Meier, is bringing his creation to Facebook.

Available Wednesday, “Civ World” is a lighter, social version of the classic PC strategy game, which launched in 1991 and migrated to video game consoles in 2008. In the Facebook adaptation, players cooperate to build cities and engage in diplomacy, scientific discovery and economics as they advance civilization throughout the ages.

“It’s built along similar lines, with a beginning, middle and end,” Meier said. “But you create a story together with a lot of other people. It’s more of a group experience.”

Like “FarmVille” and other Facebook games, “Civ World” is free to play. It makes money by selling virtual items, such as armies and weapons that can help players advance. But to make the game enjoyable for players who don’t spend anything, “Civ World” limits how much money players can spend each day.

“It’s not fun if ... someone else is winning because they are spending money,” Meier said.

“Civ World” also avoids bombarding the Facebook pages of players’ friends with posts about their in-game accomplishments and requests. With that, “Civ World” is somewhat of an anti-”FarmVille.” It’s brainier than your run-of-the-mill Facebook games. There’s strategic thinking involved while you’re completing quests and building up civilizations.

“Civ World” took nearly a year and a half to develop, which is short for a traditional computer game but very long for a Facebook title. It’s a deeper experience than many popular Facebook games, many of which require little else from players than adding “friends” and clicking their mouse on various icons.

Up to 200 people can play each game, which starts in ancient times and ends beyond the space age. Each player has a city, and they can join a civilization to cooperate with other players on quests and discoveries. They can also work together to create world wonders and vote to attack another civilization or defend their land.

“Civ World” joins Facebook less than a week after “FarmVille” maker Zynga Inc. made a filing for its initial public offering of stock. The game was developed by Firaxis and published by Take-Two Interactive Software Inc.

“We are at the very early stages of the whole Facebook gaming phenomenon,” Meier said. “’Civ World’ is taking a more game-oriented approach. It’s a really new idea that we are trying, and we don’t know if this will appeal to ‘FarmVille’ players or ‘Civilization’ players.”

If its creators succeeded, “Civ World” will do both.