Venerable Seongan explains the techniques that were used to engrave the woodblocks of the Tripitaka Koreana (National Treasure No. 32), the most comprehensive version of Buddhist scriptures in the world, at Haein Temple in South Gyeongsang. Provided by KBS


HAPCHEON, South Gyeongsang - Reporters were given a rare chance to see the woodblocks of the Tripitaka Koreana up close last Thursday during the filming of a new documentary about the Buddhist scriptures that are housed in Haein Temple, South Gyeongsang.

The Janggyeong Panjeon complex, which houses the woodblocks, are usually closed to the public, but were opened to reporters invited by KBS to observe a day of filming.

The opportunity to walk through the buildings shed new light on the woodblocks, which can usually only be seen from the entryway or through the windows outside.

Korea’s first Tripitaka, the Chojo Tripitaka, also known as Chojo Daejanggyeong, was engraved onto woodblocks in the 11th century and was completed in 1087 during the Goryeo Dynasty (918-1392). It was the biggest collection of the Buddha’s teachings on woodblocks at the time. But it was lost in a fire during the second Mongol invasion of Goryeo in 1232.

The Tripitaka Koreana (National Treasure No. 32), or Palman Daejanggyeong (“Eighty-Thousand Tripitaka”), was created from 1236-1251 to replace it. 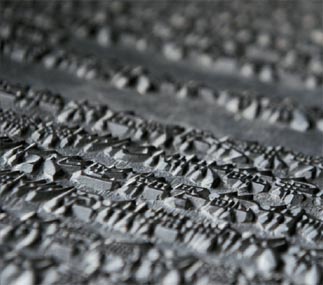 The woodblock was carved at an angle so that ink could be easily siphoned off.

The Tripitaka Koreana is comprised of 81,258 woodblocks that are 70 centimeters (27.5 inches) wide, 25 centimeters long and around two centimeters thick.

Unlike most woodblocks, whose letters are engraved at a 90-degree angle to the surface, the blocks of the Tripitaka Koreana were carved at an angle of about 45 degrees so that the ink would drain easily after printing.

Each woodblock is indexed with an inscription of its contents along the side of the block, similar to the way a book has a title on the spine.

The woodblocks are housed in the Janggyeong Panjeon. The two buildings face each other and each has two rows of windows designed to improve ventilation. The building in the rear has large windows in the upper row to take more dry wind from Mount Gaya, which is behind it. The building in the front has large windows in the lower row to make it easy for dense air carrying humidity to exit the building.

Venerable Seongan, the complex’s director of preservation, said, “They may not be the most beautiful buildings of their time, but they are the most practical and scientific.” 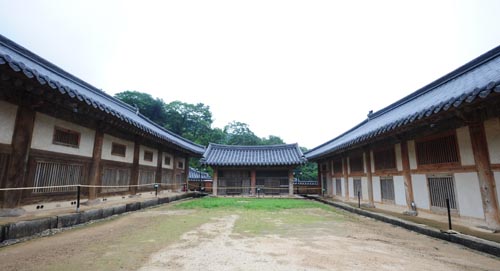 The Tripitaka Koreana is housed in the Janggyeong Panjeon complex, a Unesco World Heritage site.


The Tripitaka Koreana was inscribed in Unesco’s Memory of the World register in 2007, and the two buildings where the woodblocks are stored were added to the Unesco World Heritage List in 1995.

Haein Temple is the only place with two Unesco designations, the Ven. Seongan said.

This year is the 1,000th anniversary since work began on the Chojo Tripitaka, and the new KBS documentary will celebrate this monumental event, but aims to approach the subject from a different angle.

Choi Geun-young, the producer of the documentary, “Dharma,” which is slated to air in October, said the program will attempt to illuminate the content of the woodblocks rather than the techniques used to produce them.

“There are already too many similar documentaries on the Tripitaka Koreana and they all say the same thing,” Choi said. “According to Seongak, the chief monk of Haein Temple, the contents of the Tripitaka can be summarized in one word: mindet. The documentary will focus on practices to help change one’s mindset.”