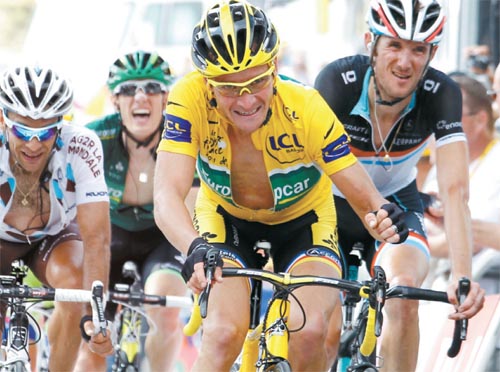 Europcar rider Thomas Voeckler of France, front, crosses the finish line during the 14th stage of the 2011 Tour de France from Saint-Gaudens to Plateau de Beille on Saturday. [REUTERS/YONHAP]


PLATEAU DE BEILLE, France - After another impressive day at cycling’s biggest race, Thomas Voeckler might be daring to dream at the Tour de France.

The 32-year-old Frenchman responded to several attacks in the punishing climb to Plateau de Beille in the 14th stage - the last in the Pyrenees - to keep hold of the overall leader’s yellow jersey.

Voeckler clenched his fist in celebration as he crossed the finish line in the same group as the rest of the contenders after a 168.5-kilometer (105-mile) trek featuring six ascents.

Having taken the jersey last Sunday, he now looks set to keep it at least until the first big Alpine stage on Thursday.

“I would lie if I said that I expected to keep the jersey, but I was more optimistic than I was two days before the Luz Ardiden stage,’’ said Voeckler, who rides for the unheralded Europcar team. “On the last climb today, I was really surprised that I was with all the favorites. At the end, it was very hard for me. But I realized that it was the same for them.’’

The 32-year-old Voeckler, who leads Frank Schleck of Luxembourg by 1 minute 49 seconds, has gained the respect of his peers. Cadel Evans and Schleck’s younger brother Andy, who have shared the past four runner-up places, praised his fighting spirit.

“Voeckler is really good,’’ said Evans, who lags 2 minutes 6 seconds behind the Frenchman. “I think he’s going to go a few more days [with the yellow jersey] at least.’’

While the big battle between the favorites has yet to begin, Voeckler has been the talk of the Tour so far. Known for his bold temperament but seen as limited in high mountains and time trials, Voeckler had expected to lose the leader’s jersey in the Pyrenees.

But he defied the odds during three days of suffering. “It’s hard for me to believe that I’m in yellow after the Pyrenees with almost the same gap that I had before the Pyrenees,’’ he said. “I won’t understand it if it continues like this for the last week because it’s unbelievable for me. It’s like a dream.’’

Voeckler first made his name when he wore the yellow jersey for 10 days seven years ago, before surrendering it to Lance Armstrong.

With two more big mountain stages and a time trial before the race reaches the Champs Elysees on July 24, Voeckler can now be considered a contender for a podium finish.