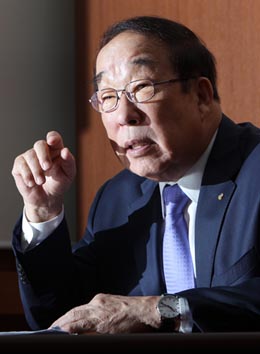 Nearly two weeks have passed since the city of Pyeongchang was announced as the host city of the 2018 Winter Olympics. Koreans have been beaming with joy, elated with a victorious ending to their 12-year campaign to get the Olympics.

Korean Olympic Committee Chairman Park Yong-sung, who played a decisive role in the winning bid, says it is time to move on to the next chapter. “In order to enjoy this to the fullest, we should be well prepared,” said the 71-year-old KOC chairman.

This has been a meaningful year for Park. After two previous failures to win Olympic bids, Park watched as Pyeongchang won in its third attempt. This year is the 91st anniversary of the founding of the KOC.


Q. What do you think about co-hosting the Olympics with North Korea?

A. It’s outrageous to say that we should co-host the Winter Olympics. The IOC empowers the city of Pyeongchang and the KOC to host the Winter Olympics. In addition, one of the greatest assets of Pyeongchang as a host city is its compact and athlete-friendly layout, where all venues are located within 30 minutes of each other. But we can’t build stadiums in the North and make athletes go back and forth between Pyeongchang and North Korea. Would the IOC even accept that?

I’m even pessimistic about fielding a joint team (between the two Koreas) for the Olympics. The KOC itself is also against the idea.

Think about it. Many young Korean athletes have been preparing for the Winter Olympics for many years, but some of them would be deprived of their chance to compete in the Games if a joint team is launched. We shouldn’t use the Games politically.

How did you feel when Pyeongchang’s victory was announced South Africa?

I glimpsed the “P” of Pyeongchang when IOC President Jacques Rogge was opening the envelope. I found myself jumping out of my seat. I had a hunch that we received more than 60 votes in the first round of voting because I saw a look of surprise on the face of Rogge. In fact, we had this analysis from late April that we would receive a majority of votes. But I tried to keep a low profile because complacency is something we should stay away from.

What was your strategy to win votes during the bidding competition?

Most people think dinners with IOC committee members mean a high chance of winning votes from them, which is not true. We tried to reach out to them in various ways and crosschecked whether they were with us or not. Another important strategy was winning the hearts of the International Federation. IOC committee members have little knowledge about the Winter Olympics, so they often seek information and advice from the IF. So we invited winter sports-related officials from European countries to Korea or flied there to meet them.

I heard your humorous presentation in Durban had a strong impression on IOC members, especially the part where you congratulated Prince Albert II of Monaco, who is an IOC member, on his marriage. You apologized for making him listen to your presentation for a third time instead of letting him go on his honeymoon.

We’ve been making presentations (on Pyeongchang) since last year, but I’ve realized our presentations were way too serious. Presentations from Germany were very different. Munich Bid Committee Chairwoman Katarina Witt knew how to enchant her audience with wit and humor. So I suggested adding some humor to our presentations. After talking to American consultant Terrence Burns (president of Helios Partners), we changed our presentations little by little, and it worked. When we had a presentation in Guangzhou, China, during the Asian Games, I told IOC committee members that the Guangzhou presentation was so excellent that the Incheon mayor nearly collapsed with a heart attack. The joke made them laugh out loud.

Mine were three-minute speeches, but I never practiced something for such a long period of time. Unlike in previous presentations, this time we hired foreign experts and had our own private lessons from them. After all, English is a second language for us. President Lee Myung-bak was no exception. Burns wanted President Lee to have a one hour lesson and he was willing to do so. Figure skater Kim Yu-na was passionate throughout the bid competition. The fluent French of Theresa Rah, a spokeswoman of the Pyeongchang bid committee, won votes of French IOC members.

The next step is to select members for the Winter Olympics organizing committee.

The organizing committee has one goal: Keeping its promises (written on the bid book). We have less than seven years to go. The urgent task we face is nurturing an Olympic workforce to manage the games during the Olympics. That’s what the organizing committee and the KOC should work together on. Another goal I have is completing stadiums as soon as possible and holding international competitions for trial runs. We should also nurture young athletes so they can win medals seven years from now.

Now that you’ve achieved your dream, what are your future plans?

I realized my dream of hosting the Winter Olympics. Personally, I’ve served as an IOC committee member, KOC chairman and International Judo Federation president. I think I’ve achieved all my dreams. But I do have dreams for the Olympics and the nation’s sports industry. I hope to see more global athletes who enjoy their sports and speak English well like figure skater Kim Yu-na.