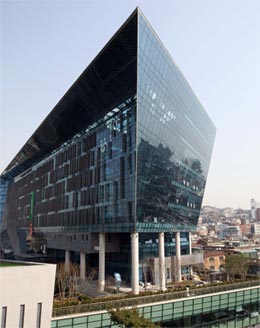 Those fancy glass facades in Seoul, architectural gems, some might say, are not seeming so fancy right now.

With the rainy season over and the scorching heat settling in, the sizzling temperature outside the Yongsan District Office during lunch hour on July 19 was 36.4 degrees Celsius (97.5 degrees Fahrenheit). Inside the glass-facade building’s lobby, the temperature was not much different. It was 34.3 degrees Celsius, merely 2.1 degrees less.

“I am an old person who hates the cold wind from air conditioners, but this is just insane,” said Yang Seong-jun, 69, who was waiting to meet with district officials about his insurance business. “I have no idea what is going on with this luxurious, expensive new building. It looks nice outside, but as far as I know, people try their best to avoid coming here because it’s so hot inside.”

The Yongsan District Office is just one of many new local government buildings suffering from the scorching hot summer weather because of a fancy glass facade. With sunlight beating down on them, they have become giant greenhouses with unbearable temperatures for civil servants and visitors alike.

According to the Yongsan District Office’s public affairs office, a rigid energy saving program has been implemented, perhaps fueling the high temperature - and hot tempers - inside the building. Air conditioners are being turned on only twice a day, for about an hour in the morning and from 1 to 3 or 4 p.m. in the afternoon, only when the outside temperature is higher than 30 degrees Celsius.

During lunch hour, computers and lights in the hallways are shut down.

And on this day, visitors waiting their turn were seen impatiently using handheld fans in a futile attempt to cool off. As the lunch hour ended, civil servants turned on their computers and electronic fans, while the lights in the hallways remained off. And finally, as the temperature became unbearable inside the building, the air conditioning was turned on. After about 30 minutes, the temperature went down to 29.2 degrees Celsius.

The situation inside Seongnam City Hall, another glass-facade building, was no better. With air conditioners on, the lobby was 29.5 degrees Celsius.

“I know, it’s a bit hot in here,” said a civil servant at the information desk. “But at least today, we have the air conditioners on.”

The searing temperature inside during the summer - and chill during the winter - is a predestined fate for the new local government buildings because they chose to use glass curtain walls for the look instead of more energy-efficient considerations.

“Compared to other materials such as bricks and concrete, glass curtain walls are less energy efficient,” Sung said. “They absorb heat from sunlight, particularly during the summer. Without proper shade, the indoor temperature will be inevitably higher than other types of structures. Cooling systems consume electricity and it is not a surprise that glass-curtain-wall buildings use more energy.”

According to Sung, construction costs for a glass curtain wall is not much different than reinforced concrete or brick.

“Most often, glass curtain walls are chosen for the sake of aesthetic beauty, not for practicality or functionality,” he said.

But a recent survey by the government found that many newly built local government buildings used glass curtain walls even though it is known that they are highly energy inefficient.

The Ministry of Public Administration and Security conducted a survey in November of the nation’s 28 local government and state-run company buildings that were built after 2005. Of them, 21 were given recommendations to improve their energy efficiency.

According to the survey, none of the 28 buildings were rated the top grade in the five-level energy efficiency scheme, while nine of them were rated in the fourth level, consuming 400-450 kilowatt hours per square meter every year. Yongsan District Office was one of them. Five were given a grade of five.

Shocked by the findings, the ministry has issued recommendations for the local governments to change designs and lighting systems in order to save electricity. The Lee Myung-bak administration’s low-carbon, green growth campaign seeks to improve energy efficiency in both public and private buildings to lower dependency on fossil fuels.

The recommendations include installing back panels behind the glass curtain walls to block sunlight and improve insulation. Lobbies’ high ceilings were also ordered to be lowered to improve energy efficiency.

Last Friday, the government issued a desperate appeal to the nation, asking the public to join in efforts to save energy. Minister of Knowledge Economy Choi Joong-kyung appealed to citizens to limit their use of electricity by maintaining a room temperature of 26 degrees Celsius or higher in their homes and offices and to minimize use of air conditioners and fans during peak hours. He also urged car owners to refrain from driving and use public transportation instead.

The government expected the country to set new summer power consumption records around the second week of August. The government worries that the country’s electricity reserve rate could fall below 5.6 percent of its total supply capability. The 7 percent level is considered a safe margin. If the reserve rate falls below 4 percent, the government will take emergency measures to avoid potential blackouts.