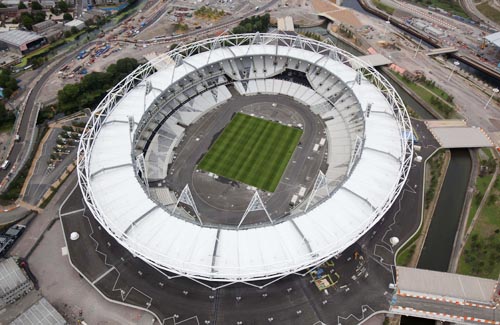 In this photo taken July 14 this year, and made available by the Olympic Delivery Authority, an aerial view of the Olympic stadium is seen at the Olympic Park, London. [AP/YONHAP]


LONDON - London celebrated the one-year countdown to the Summer Games on Wednesday with the first dive into the new Olympic pool, the presentation of the medals and a call to the world’s athletes to come to the party in 2012 to compete in the country that “invented modern sport.’’

Exactly one year from Wednesday - on July 27, 2012 - London will be staging the opening ceremony of the Olympics, the first city to host the world’s biggest sports festival for a third time after previous games in 1908 and 1948.

In a live televised ceremony in Trafalgar Square, IOC President Jacques Rogge formally invited 202 national Olympic committees from around the world to send their athletes to London a year from now.

“The athletes will be ready, so will London,’’ Rogge said.

The ceremony took place in the same square where thousands of people celebrated on July 6, 2005, when Rogge opened a sealed envelope in Singapore and announced that London had won the right to host the Olympics, beating rival bids from Madrid, Paris, New York and Moscow.

“A dream was born when the IOC awarded the 2012 Games to London,’’ Rogge said. “The world’s finest athletes began dreaming of competing in this magnificent city, in packed state-of-the-art venues, and in front of passionate crowds.

“As in 1908 and 1948, they knew they would be coming to the nation that invented modern sport and the concept of fair play.”

British Prime Minister David Cameron said the Olympics would showcase the nation at its best.

“This has the makings of a great British success story,’’ he said at the ceremony. “With a year to go, it’s on time, it’s on budget. .?.?. We must offer the greatest ever games in the world’s greatest country.’’

The festivities started across town at the new, gleaming aquatics center at Olympic Park in East London, where 2009 world champion Tom Daley performed the first dive into the pool, knifing cleanly into the water off the 10-meter board.

“It was great - a bit cold actually,” Daley said. “It’s going to be awesome next year.”

The ceremony also featured the unveiling of the Olympic medals by Princess Anne, an IOC member and former Olympic equestrian competitor.

Designed by British artist David Watkins, the medals feature Nike, the Greek goddess of victory, on one side. On the other is a complex image containing five symbolic elements, including the River Thames. During the games, 2,100 medals will be awarded at 302 medal ceremonies.

“The Olympic venues are already so ready that we might as well call a snap Olympics tomorrow and catch the rest of the world napping.’’

In a quirky twist, the Olympic countdown clock in Trafalgar Square read 366 days to go. No, it wasn’t a glitch - 2012 is a leap year.

Earlier Wednesday, the 269-million-pound ($442 million) swimming complex was officially opened, the last of the six main venues in the Olympic Park to be completed. The 80,000-seat main stadium, the velodrome, handball arena, basketball venue and international broadcast center were all finished earlier this year.

A year from now, London will be welcoming 10,500 athletes from more than 200 countries, 5,000 coaches and team officials, 20,000 media personnel and hundreds of thousands of visitors.

The 17-day festival will feature athletes competing in 26 sports in 32 venues.

Ninety percent of the venue construction is complete, a record number of tickets have been sold and organizers remain within their 9.298 billion pound ($15 billion) budget.

He said London is among the best prepared host cities a year out from the games.