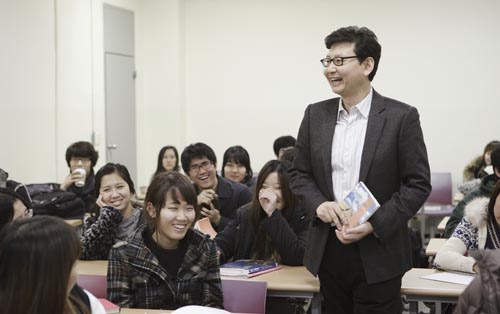 Professor Shynne Gwang-hyun, 50, of Seoul National University teaches English Literature in a classroom (above). Shynne was diagnosed with stage-four gastric cancer in February and died on Sunday after a long battle. [JoongAng Ilbo]


The death of a beloved Seoul National University professor, who was known for being an anchor and mentor to his students, has plunged the campus into mourning.

Shynne Gwang-hyun, 50, a professor of English literature, succumbed to cancer on Sunday, according to the university, after being diagnosed with stage-four gastric cancer in February.

SNU students remembered him as a passionate and attentive teacher who even concerned himself with his student’s financial needs.

Shynne taught several classes, including English literature from the Middle Ages and introductory English classes, since he joined SNU’s faculty in 1994.

Dozens of students gathered at the funeral hall of Seoul National University Hospital to pay their respects and remember the impact Shynne had on their lives.

“He was the best teacher and emotional anchor we had met since we entered the university,” An Hee-Beom, a sophomore, said. “He memorized every student’s name in class in about one to two weeks. And he gave his cell phone number to communicate and share students’ worries through text messages.”

When students were in trouble, Shynne was like an attentive older brother.

One day, he came across one of his students on a bench on campus, worrying about making his rent later that day or being forced to move out. Shynne later came over to the bench and handed an envelope of money for the student’s rent. The professor smiled and told the student that the money would be advance pay for his part-time work: he asked the student to clean his desk for him any time he could.

“There is a big pine tree that provides shelter for birds on campus,” a senior said. “Professor Shynne always had said that he wanted to stay on campus like the pine tree and be a spiritual shelter for his students.”

However, in February, Shynne went to the hospital after feeling under the weather. A few days later, Shynne was diagnosed with stage-four gastric cancer.

His doctors told him that he should begin making arrangements to prepare for his passing, but Shynne never gave up and fought valiantly against the disease.

Shynne lost about 15 kilograms (33 pounds) from painful cancer treatments, but the professor never lost his beautiful smile in front of his students when they visited him at home.

In June, his health took a sudden turn for the worse. His doctor suggested that Shynne give a final lecture to his students, but he refused.

“He told me that he didn’t want to be remembered as a weak patient in his students’ memories,” his doctor recalled. Professor Shynne closed his eyes with his family at his side and didn’t wake up again.