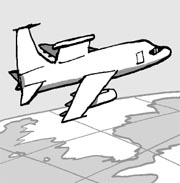 Kites were originally made for military operations. The first kite took the shape of a raptor with its wings spread out.

Gen. Han Xin of China’s ancient Han Dynasty flew a kite to determine the distance to the enemy camp and to study geography.

In Korea, Goryeo Dynasty (918-1392) Gen. Choi Young also used kites when suppressing the rebellion of the Mongols, who were breeding horses in Tamra, modern-day Jeju Island. Fireballs were attached to the kites and flown off to the enemy camp. Some very large kites resembling hang gliders also carried soldiers up cliffs.

Adm. Yi Sun-sin of the Joseon Dynasty (1392-1897) used kites as a means of communication to commend his forces. He created 80 codes using a combination of kites in different shapes and colors. For example, a blue kite with red marking meant “attack from the east and the south at the same time.”

When airplanes were invented, kites were replaced by scout planes, of which there were several types. The R-series aircraft conducted reconnaissance missions. The SR-71, which is known by the nickname “Blackbird,” was a strategic reconnaissance aircraft.

Another of these early aircraft was the Lockheed U-2, which carried out reconnaissance missions in Soviet airspace. The U.S. Central Intelligence Agency wanted to disguise the function and purpose of the aircraft, so gave it a name starting with “U” for “utility” instead of with “R” for “reconnaissance.”

When it went on its first spy mission in 1955, it flew at an altitude of 21 kilometers (13 miles). This was well above the altitude fighter jets could fly, making the U-2 virtually untouchable.

The aircraft, which was given the nickname “Dragon Lady,” came to the attention of the public when it was shot down by a missile in May 1960.

Since then, the airborne warning and control system has made reconnaissance operations even more advanced. The early warning system was installed into a remodeled Boeing transport aircraft.

The E-737, the newest airborne early warning and control aircraft, will be placed in the field in September. The aircraft, nicknamed “Peace Eye,” can detect up to 1,000 targets at once within a 500-kilometer radius. As a protector of peace, this modern-day kite will fly over the Korean Peninsula to secure peace in the region.