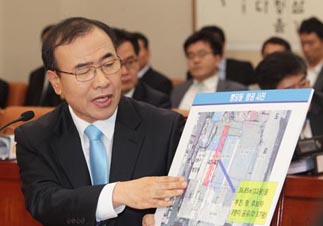 The chief prosecutor nominee faced tough questions at a confirmation hearing yesterday over his ethical qualifications for the job, including allegations of draft dodging.

President Lee Myung-bak appointed Han Sang-dae, head of the Seoul Central District Prosecutors’ Office, to replace Kim Joon-gyu, who quit in early July in protest of the National Assembly’s passage of a judicial reform bill he saw as favoring police.

During the confirmation hearing held at the National Assembly, opposition lawmakers bombarded the 52-year-old Han with questions about whether he attempted to evade mandatory military service in the early 1980s by receiving back surgery. He flatly denied the allegation, saying the operation was necessary.

All able-bodied Korean men must serve about two years in the military, a duty considered a key ethical requirement for high-level officeholders and politicians.

Han did, however, offer an apology for falsely changing his home address to send his two daughters to prestigious schools in an affluent region.

“I deeply regret it,” Han said. “In light of this, I will take care of my personal and family affairs more thoroughly.”

Although the confirmation hearing is widely seen as a formality, as the National Assembly has no power to reject the president’s appointment, several nominees have declined their nominations in the past after facing criticism over allegations of wrongdoing during the hearing.