Rain, rain, go away and don’t come back

Rain, rain, go away and don’t come back 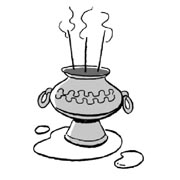 From the beginning of human civilization, having too much or too little rain has always been a problem. Since rain is the will of the gods, all we can do is pray for it to go away.

Joseon-era scholar and writer Seo Geo-joeng’s poem “Rain Again,” which is included in the collection “Sagajip” suggests that natural disasters, especially floods, were a major concern of the people in his time. He wrote: “When the rain stops, you hope for rain. When it rains, you wish for it to stop. How can the wills of the heaven correspond to the demands of the earth? As long as we don’t suffer floods and droughts every year, we should be content with eating porridge for breakfast and dinner.”

These rituals may be as old as the first kingdom in Korea. For example, the myth of Dangun, the founder of the first Korean kingdom, includes a story about a rain god called Usa.

More specific records can be found much later in history. “Goryeosa” (History of Goryeo), includes stories about rituals for rain in times of drought and for sun during a flood. When the monsoon rain did not stop, a prayer ceremony for sun called Yeongje was held.

There are numerous records of rituals for sun in “The Annals of the Joseon Dynasty,” which is a treasure chest of data about the Joseon Dynasty (1392?1897). In the ninth year of King Taejong’s reign, the king sent down an order to hold prayers for sun at the four gates of the capital. Gicheongje appears over 220 times. An agency called Jeonhangsa was even installed under the Ministry of Rites to oversee the business of prayer rituals for rain and sun. Gicheongje was held for three consecutive days at the city’s four main gates.

A few days ago, the first Gicheongje ritual performed in 100 years was held at the National Folk Museum. The last Gicheongje was held around 1900 under the reign of King Gojong.

By now, all of us in Korea have grown tired of the endless torrential rains. In the old days, after a flood, which they believed had been stopped because of the Gicheongje ritual, people would hold a ceremony of expressing their thanks to the gods. These days, I’m sure we would all be happy to offer our gratitude as well - if only the rains would stop.