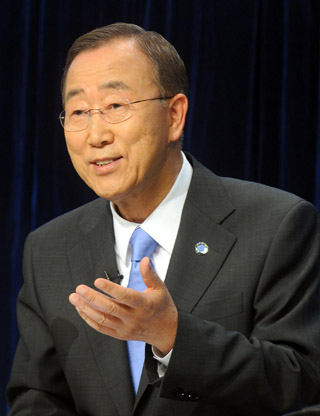 His remark comes amid the UN’s calls for humanitarian aid for the North as well as active diplomacy with the regime on nuclear disarmament.

“The sanctions by the UN on the North could be lifted, but it is not possible to predict when it will be,” Ban said during a Q&A session with local television journalists in Seoul.

The deadlocked six-party denuclearization talks - the resumption of which Ban has urged in recent months - shows signs of easing in light of a series of inter-Korean and Washington-Pyongyang contacts last month.

Despite the unresolved situation, Ban said the South’s current efforts to improve inter-Korean relations were positive and should continue.

“The most important thing is the efforts by the South-North authorities to widen cooperation through dialogue and to reduce the gap in mutual understanding and that should be done with patience,” he said.

He urged the South to provide humanitarian aid to the North, saying it would help bring reconciliation.

Seoul said on Wednesday that it would send 5 billion won ($4.6 million) worth of emergency food supplies to the North but not cement or heavy equipment as the North demanded, reflecting concern that the aid could be diverted to the North’s military.

The South came under two deadly military provocations last year: the sinking of the Cheonan, which the North denies, and the shelling of Yeonpyeong Island, which the North said was done in self-defense.

Ban said another inter-Korean summit, following two previous ones in the previous decade, would be the most necessary and effective way to patch up inter-Korean relations, though it is up to the South to push forward with the plan.

Asked about a plan to visit North Korea, Ban said he was open to discussing with the North the timing and the agenda of a possible visit but said he would decide when to visit after determining whether the visit could produce a successful outcome.

He briefly touched on the sizzling territorial disputes between Korea and Japan - over Dokdo as well as the naming controversy of the East Sea as the Sea of Japan - by expressing hope for a swift resolution.

Ban, visiting his country for the first time since winning another five-year term as the UN chief, attended yesterday the opening ceremony of the Global Model UN Conference.

At the conference in Incheon, Ban said he would focus his second term on delivering results on global issues through active cooperation with countries all over the world.

“If there is one theme that sums up my first term, and which will run through my second term, it is ‘new multilateralism,’?” Ban said at the event. “My pledge to member states is to make the United Nations even more effective and relevant.”

Ban also gave a special lecture to around 1,000 middle school, high school and college students gathered at the University of Incheon yesterday, urging them to take interest and participate in the works of the UN.