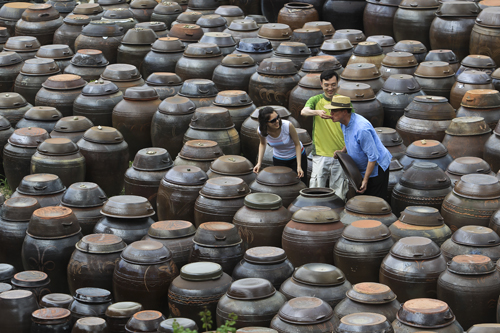 Lee Charm, CEO of the Korea Tourism Organization, right, and his daughter Mikah and son Jaysoo taste jangajji (picked vegetables) at the Institute of Traditional Korean Food in Pyeongchang, Gangwon. By Shin Dong-yeun


PYEONGCHANG, Gangwon - As Pyeongchang prepares to host the 2018 Winter Olympics, the city welcomed a very special guest last weekend. Lee Charm, CEO of the Korea Tourism Organization, made a two-day stop in the eastern city as part of an 11-day cross-country vacation with his family that he is taking to both relax and continue his mission to promote tourism in Korea.

Lee, a German-born Korean resident, is the first naturalized Korean to be appointed as CEO of the state-owned company. He first visited Korea in 1978 and became a Korean citizen in 1996 with the name Lee Han-wu. He changed his name to Lee Charm in 2001. He gained fame through appearances in Korean dramas, including one called “What’s Love” (1992) as a foreigner married into an extended Korean family.

Through his trip, which ends Monday, he is promoting his project, “Refresh Leave,” which he has been working on since he started working for the KTO in July 2009. The project encourages people to take vacations longer than a week, which is the typical amount for most working Koreans.

Although his job requires him to travel to every nook and cranny of Korea to promote tourism, Lee hasn’t taken a vacation with his entire family since he accepted the KTO position two years ago so he decided to share his newly acquired knowledge of the country with his family.

He invited the Korea JoongAng Daily to accompany them on their first two days of the trip in Pyeongchang on Aug. 5 and 6. The family trip also includes stops in Andong in North Gyeongsang, Namhae in South Gyeongsang and Jeonju in North Jeolla. 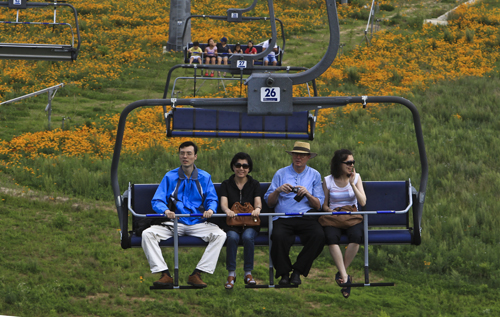 Lee Charm and his family take a ski lift at Alpensia Resort in Pyeongchang.

Lee based his itinerary on the places he wanted to show his family, but he also wanted to use a portion of his time to check out projects he has been promoting as the KTO CEO.

He said one of his primary goals with this trip is to encourage Koreans to spend their vacations within the country, since many people are starting to go overseas on vacation when they get a chunk of time off that’s longer than a week.

“I’m here to show that people can get the best vacation experience here in Korea,” Lee said as he arrived in Pyeongchang around lunch time on Aug. 5.

The first stop was a restaurant whose chef incorporates the concepts of yin and yang and the five elements - metal, wood, water, fire and earth - into his cooking. During lunch, Lee talked about what had prompted him to stay in Korea.

“I settled in Korea because I like the spirit that exists in places all around Korea,” Lee said. “Boriam in Namhae and Mai Mountain in Jinan are some of the places I call ‘power spots.’ These places are where that spirit flourishes. So the KTO has developed a number of programs in these places, since I thought it was something that would interest foreign tourists.” 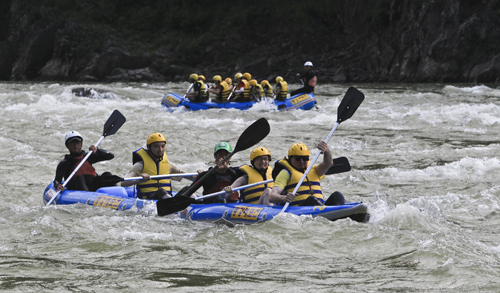 Lee Charm canoes with his son Jaysoo and daughter Mikah on the Dong River in Pyeongchang.

The trip gave Lee’s family time to get reacquainted. His daughter, Mikah, 21, and son, Jaysoo, 25, both go to school in Germany but are home for the summer.

“Since they are all grown up and studying abroad, it’s hard to find time to spend with family,” Lee’s wife, Lee Mi-ju, said.

When they arrived in Pyeongchang on Aug. 5, the family had lunch at a traditional Korean restaurant and then went outside to relax. Before the meal, Lee’s wife watched as Mikah and her father took photos of butterflies landing on flowers and Jaysoo sat under the shade and read a book.

“This is our first time taking such a long trip within Korea,” Lee’s wife said with excitement.

Next, the family went canoeing along the Dong River, which flows through Pyeongchang. During the 5-kilometer trip, the family sat back and let their canoes bob along on the water. Later, in a mischievous moment of family fun they got into a water fight with a group of people in other canoes nearby as their laughter echoed throughout the valley. Soaked in river water as they stepped out of the canoe at the end of the trip, they kept gazing back out over the river as if they couldn’t believe this phase of their journey had come to an end. 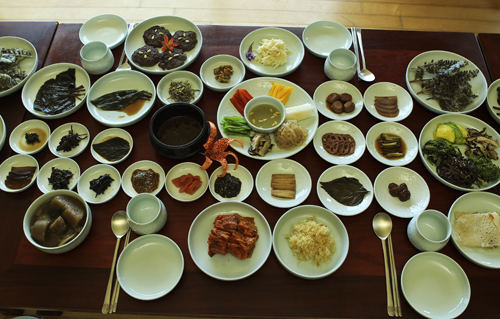 Lee and family had a Korean-style lunch, above, at the Institute of Yin Yang and Five Elements in Pyeongchang on the first day of their trip. Most of the dishes were pickled vegetables and some had been preserved for more than three years.

The next day, the family headed out to the Alpensia Resort in Pyeongchang, where the opening and closing ceremonies for the 2018 Winter Olympics will be held. There, the family went on a ride called Alpine Roaster, which takes visitors on a wild ride down a ski slope in cars they can control.

As they made their descent, Lee tried to take a photo of his daughter, but her car was moving too fast for the camera to catch her.

“I didn’t put on the brakes for the entire ride,” Mikah said proudly.

That afternoon, the family participated in a temple stay program at Woljeong Temple. In addition to following the regular temple schedule, the program also included an art class. At the end, they had produced fans made with rubbings of flowers and Buddhas, and Mikah, the family photographer, made sure to snap a picture for her scrapbook.

At lunch on the second day, the family reviewed their itinerary, which was to include a mix of popular and lesser known spots such as Bear Tree Park in Yeongi, South Choongcheong.

“Mikah really loves animals, and the place is known for the hundreds of bears who live there,” Lee said. He said he will post pictures of his trip on his blog after he gets back to Seoul. To see them visit blog, naver.com/charmlee21.