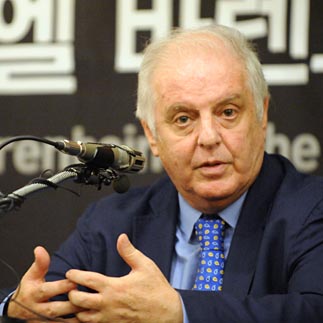 Despite wrapping up his Beethoven concerts yesterday at Imjingak, a park close to the Demilitarized Zone, Israeli-Argentine maestro Daniel Barenboim refused to describe himself as a standard-bearer for peace, and was keen to downplay the political implications of his visit.

But Barenboim, on his first visit to Korea in 27 years, could hardly have chosen a more symbolic venue to cap the five days of concerts during which he oversaw the complete cycle of Beethoven Symphonies.

Before raising his baton at Imjingak for the West-Eastern Divan Orchestra to perform Beethoven’s Symphony No. 9, the 68-year-old pianist-conductor responded in self-effacing fashion when reporters sought to add meaning to the concert, which took place only seven kilometers from the inter-Korean border.

“I don’t consider myself somebody promoting the message of peace,” he said at a press conference on Aug. 9. “I am doing what I am doing as a result of my belief and courage. What I am doing is not to win the favor of the general public or to be loved, like politicians do.” 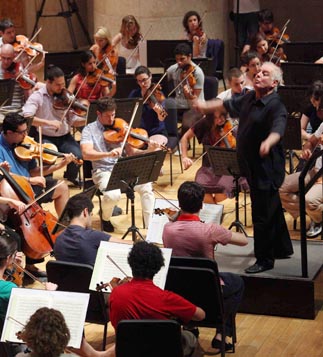 Barenboim at a dress rehearsal in Beijing on Aug. 5 [XINHUA/YONHAP]

He would not be drawn on inter-Korean politics because, “I don’t know enough about it,” he said, but added that “the lack of dialogue [between the Koreas] won’t help.”

Born in Argentina of Jewish-Russian descent, Barenboim has however made a point of commenting on political issues in past decades. He founded the West-Eastern Divan Orchestra in 1999 with late Palestinian-American academic Edward Said. The ensemble was named after a collection of poems by Johann Wolfgang von Goethe and was designed to present a shared vision for potential Israeli-Palestinian cooperation.

It subsequently drew elite musicians not only from Israel and Palestine but also from neighboring countries such as Syria, Egypt, Iran and Jordan. Tyme Khleifi, a Palestinian violinist, and Guy Eshed, an Israeli flutist, sat next to each other at the press conference as representatives of the members. They acknowledged their emotional connections to certain political realities but also their differences of opinion.

This year, the orchestra has included Asia for the first time in its world tour itinerary. Having visited Doha and Europe, it held a concert in Shanghai before coming to Seoul. The orchestra next heads to Lucerne and Salzburg in Switzerland and Berlin.

The last time Barenboim visited the Korean capital was with the Paris Orchestra in 1984. “Korea has changed more than I have,” said the maestro, who continually stressed music’s power to bring people together amid political conflict.

“Music does not bring peace. Music cannot solve conflict. But it has the ability to involve people. When people have shared the musical experience, sometimes it makes the dialogue a little bit easier,” he said, adding that he wished Koreans from all corners of the peninsula could have attended.