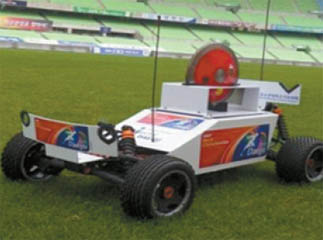 Electric vehicles and other green initiatives will be deployed in Daegu to stay in line with eco-friendly policies.

To make the nine-day event more environmentally friendly, 22 electric cars will be put into action. Their primary task will be ferrying athletes around, but they will also transfer cumbersome equipment such as hurdles and pole vaults.

For the first time at a World Championships, an electrically powered device will be used to flatten the sand pits used in long and triple jump events.

According to organizers, the device can mix up and smooth out sand in just 30 seconds, a huge step up from the five minutes it formerly took staff to do by hand.

A remote-controlled vehicle will also be used for field events like the javelin and hammer to make them safer. The 30-centimeter-long vehicle is designed to reduce the risk of operating staff getting injured while collecting shots and other objects, and can also save time.

Additionally, organizers are trying to utilize Segways, which cart people around on two wheels at speeds of up to 20 kilometers (12.4 miles) per hour, to speed things up on the field.

For race walking and marathons, Daegu will use hybrid cars manufactured by the IAAF's official global sponsor, Toyota. The organizing committee said its Prius hybrid will be used as the command vehicle for the road races.