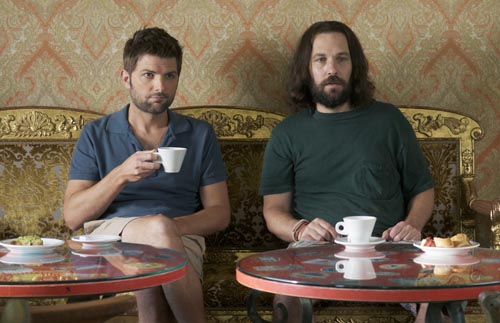 In this film image released by the Weinstein Co., Adam Scott, left, and Paul Rudd are shown in a scene from “Our Idiot Brother.” [AP/YONHAP]


LOS ANGELES - For more than a decade, Paul Rudd has served as a comedic chameleon, effortlessly moving from sidekick (“Anchorman: The Legend of Ron Burgundy,” “The 40-Year-Old Virgin”) to scene stealer (“Knocked Up,” “Forgetting Sarah Marshall”) to straight man (“Dinner for Schmucks,” “I Love You, Man”). He’s tackling his most transformative role yet in “Our Idiot Brother.”

The affable 42-year-old actor grew his hair and beard out last summer to portray Ned, an easygoing organic farmer whose lack of ambition and independence continually frustrate his family.

Rudd developed the character with friend-neighbor-director Jesse Peretz. (The pair first worked together on the 2002 improvisational comedy “The Chateau.”)

The indie dramedy, which was snapped up by The Weinstein Co. at this year’s Sundance Film Festival, is distinctly different from any of the other movies listed on Rudd’s seemingly never-ending resume. It is not as silly as “Role Models” or “Dinner for Schmucks” nor is it as serious as “The Cider House Rules” or “The Shape of Things.”

“It’s just like life,” Rudd recently said over breakfast. “It’s not unrealistic or a cliche. That’s one of the things I really liked about this project. There’s a definitive point of view. To me, the character was not just about his look: the long hair, the beard, the Crocs. Those are external things. He’s just a good guy who’s into biodynamic farming.”

After being released from prison for selling marijuana to a uniformed police officer, Ned becomes entangled in the lives of his three sisters: free-loving Natalie (Zooey Deschanel), career-focused Miranda (Elizabeth Banks) and perfection-seeking Liz (Emily Mortimer). As a teenager growing up in Overland Park, an idyllic suburb of Kansas City, Missouri, Rudd had a penchant for public speaking. High school classmate Sean Tevis recalled he would do things like spontaneously commandeer grocery store speaker systems to announce fictitious sales or persuade his fellow yell leaders to sneak into cheerleaders’ homes to invite them out.

“It’s the kind of thing that a normal person wouldn’t do,” said Tevis. “Paul always had no fear of authority. I think he’s just always done what he wants because it pleases him, which I guess has led him to pursue things that most people would say, ‘Oh, I could never do that.’ I don’t think that particular thought has ever really entered his head.”

Rudd’s unflappable nature and boyish charm led him from the land of theater, commercials and television parts in Los Angeles to his breakout brotherly role as the snarky stepbrother in 1995’s “Clueless.” He later relocated to New York and went on to work regularly with such playwrights and filmmakers as David Wain, Neil LaBute, Judd Apatow and Peretz.

Rudd, who still lives in New York with his wife and two children, said that despite his agent’s advice, he tends “not to differentiate between dramas or comedies, lead roles or supporting ones.” He doesn’t mind if a movie is similar to one he’s already done. He’s drawn to films as a whole, not just the characters he portrays. Mostly, he just wants to have fun.

Rudd is currently in the middle of filming an untitled follow-up to Apatow’s “Knocked Up” in Los Angeles. It focuses on the bickering sister and brother-in-law of Katherine Heigl’s character that he and Leslie Mann played in the 2007 romantic comedy. It’s the first time Rudd, who studied at the American Academy of Dramatic Arts, has reprised a film role.