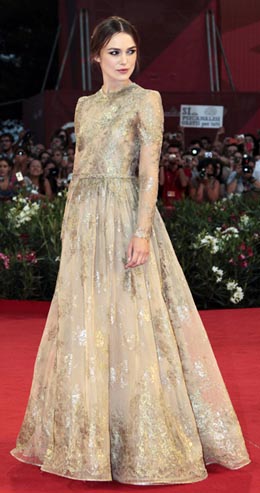 VENICE - British actress Keira Knightley joked on Friday that she drew on her own madness to play a deranged heroine in David Cronenberg’s “A Dangerous Method,” which premieres at the Venice Film Festival.

Knightley’s harrowing performance as Sabina Spielrein, a young woman who suffers from hysteria before she is treated by - and has relationships with - both the psychologist Sigmund Freud and his pupil Carl Jung, stole the film.

“Did I enjoy playing a deranged character? It was great fun. I’m obviously crazy anyway, so I drew on that,” she quipped after an advance screening of the film, in competition for the Golden Lion award at the world’s oldest film festival.

It is Jung, played by Michael Fassbender, who first comes across the passionate and violent Sabina. Intrigued by her intelligence and beauty, he begins trying out Freud’s talking cure on her, but is soon dangerously captivated by her.

Cronenberg, whose works include the dark thrillers “Spider” and “A History of Violence,” acknowledged his latest film is different from the others, saying that it may well appeal more to Freud and Jung followers than to his fans.

But he said: “My basic principle has always been the same: I give the movie what it wants. I just shoot the movie that asks to be shot.”

With “A Dangerous Method,” Cronenberg said he had sought to make “an elegant film that trades on emotional horror but loses none of its power to seduce.”