Left: A student gives a presentation about a smartphone application designed to help foreign residents in Seoul. Right: Forum members conduct a survey about trash bins in Myeong-dong. Provided by the Seoul Global Center


When faced with difficult moments while living in Seoul, some people vent their frustrations while others try to come up with solutions. Turning their frustration into action, one group of students has decided to voice their opinions directly to city officials by participating in the Seoul International Student Forum (SISF), a program run by the Seoul Global Center of the Seoul Metropolitan Government.

The students are members of the 2011 SISF, a platform created by the city to solicit proposals for creating a more convenient living environment for foreign residents. At the forum, the students presented constructive ideas to help Seoul become more globalized and appealing.

A total of 80 students from 32 countries came up with solutions to problems foreign residents face in Seoul at the policy proposal competition held Aug. 26 at City Hall. Here are some of the winning ideas.

More trash bins in the streets

Teo Ming Rui, a Singaporean student, remembered the many times she has had to hold onto garbage until finally coming across a trash bin in the street. Rui said she thinks that Seoul is a great city, but that when it comes to trash bins, it’s a different story.

“In Singapore, it is almost impossible not to spot one near you wherever you go,” she said.

Using Rui’s experiences as a starting point, a group led by Christine Mae Sarito, a Filipino student at Sogang University, conducted a survey of short- to long?term international residents in Seoul about what they think of the cleanliness and current locations of trash bins across the city. Among the 195 respondents, both Koreans and foreign nationals, 68.7 percent said that they had experienced difficulty disposing of garbage because public trash bins are a rarity.

Based on the results, the group affirmed that more trash bins need to be placed where people usually congregate, such as at bus stops, subway entrances and crosswalks.

To prove the need for more trash bins, the group conducted an intriguing experiment, comparing the time it takes to travel between trash bins in four major cities around the world: Singapore, Hong Kong, Madrid and Seoul. A resident of each city would start off at a trash bin in the street, measuring how much time it took to arrive at the next bin while strolling around the city.

The results were quite eye-opening: Singapore finished first, with a travel time between bins of 57 seconds, while Seoul placed a distant last, with a time of 6:32.

Sang-mi Yun, the director of the experiment, said that the insufficient number of trash bins leads people to throw garbage on the street.

“As Seoul is one of the world’s leading cities, I thought that comparing its cleanliness with that of other popular tourist destinations could tell us where Seoul stands,” said Yun.

After additional on-the-spot surveys conducted in crowded areas like Sinchon and Itaewon, the group became convinced that the current number of trash bins is not nearly sufficient to accommodate the public. Subway ventilation grates in these areas are a particular target for litter, and most are chock full with cigarette butts and food wrappers, which could cause ventilation problems.

The group suggested that Seoul increase the number of trash bins and maintain a consistent distance between the bins in areas with a high level of pedestrian traffic. In addition, they concluded that the current design of trash bins could be improved with larger fonts, brighter colors and more images to assist people who can’t speak Korean or English. They said this will help prevent people from dumping garbage on the street, create a positive image of Seoul as a clean city and help attract more tourists from around the world. 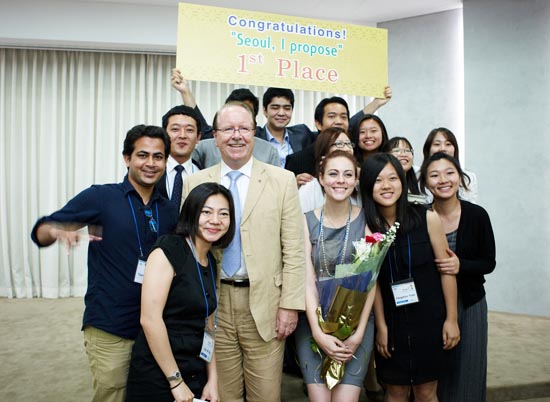 The group that won first prize poses at City Hall on Aug. 26 after the policy proposal competition.

Another group pointed out that many international students experience difficulty finding a place to live in Seoul.

“Housing-related issues are a big concern for a number of reasons, ranging from lack of information to budget squeeze,” said Katheryn Bolton, a student at Ewha Womans University.

In 2008, Seoul designated more than 100 registered realtors who are proficient in foreign languages as Global Real Estate Agencies to help foreigners with housing procedures, including understanding and signing rental contracts.

For most foreigners surveyed, however, the system didn’t seem to be of much help. To assess the Global Real Estate Agencies, the group created a task force. After visiting and calling a dozen agencies, Aphas Maskey, a Nepali student, reported on his observations.

“Most of the agents are equipped with lease contracts in English and some of them are quite fluent in foreign languages and trying hard to help.” Maskey said. “But communicating with them in foreign languages, for me in English, was actually tough and agents who were not good at saying numbers in English made me anxious, thinking that signing a contract with the person might pose potential problems.”

He added that getting hold of the agents in person or on the phone was also challenging, as they were often not in their offices.

The group proposed that Seoul strengthen its connections with the Global Real Estate Agencies to provide more practical housing-related assistance to expats. First of all, the group said it believes that the city can provide international students with legal and real estate information during orientation sessions at universities. Through the orientation program, students would learn about the Global Real Estate Agencies, as well as the country’s unique rental system.

They also suggested that the Seoul Global Center, a comprehensive support organization for expats, play a role in reviewing rental contracts. Currently, the center has a real estate expert who provides expats with advice. The group also proposed that the center create an Internet forum for housing-related issues that would allow expats to post a picture of a contract so that the expert could review it and leave recommendations in the client’s mother tongue.

A group led by Brandon Hensley, a student from the United States, created its policy proposal based on Korea’s standing as an IT powerhouse.

As the number of smartphone users grows, more applications are entering the market, but many of them are only available in Korean. And the number of applications designed to help international students in Seoul, in terms of general information and directions, is very limited.

To find out whether incoming international students received information to help them transition to life on campus, the group conducted a survey. Fifty percent of respondents confirmed that they received this information from their schools before coming to Korea, while 42 percent said they did not.

When asked what kind of information they wanted in the app, the list from respondents included: a map depicting a journey from the airport to their campus; campus maps; bus routes and boarding locations; and details on nearby emergency centers and temporary housing.

The proposed app would include a map based on written directions from the airports to university campuses and would be based on Google maps and similar visual guides.

To become familiar with the areas surrounding their campus, new students could use the application to receive a wide variety of information ranging from medical centers and bus/subway stops to restaurants and banks.

Like Google maps, the application will be designed to be quickly and frequently updated.

Incoming students who have an iPhone, iPad or Android device would be able to download the application prior to arriving in Korea.

To better promote the application to students planning to come to Seoul, expat support centers like the Seoul Global Center, in partnership with universities, could introduce the application through e-mail notices to incoming students.

The forum concluded with the policy proposal competition last week. If you are interested in the Seoul International Student Forum or wish to apply for next year’s forum, please visit the Web site at global.seoul.co.kr or call (02) 2075-4108.