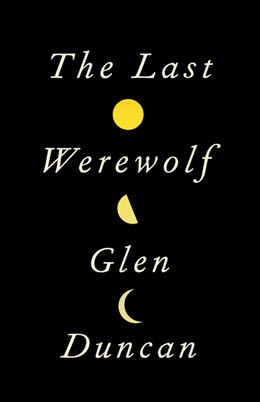 NEW YORK - British author Glen Duncan has published seven critically acclaimed novels, often exploring touchy topics such as violence and perversity as well as love and morality. He has employed the fantastic - in his earlier book “I, Lucifer” the devil is transformed into a human for a month - to explore these themes, but perhaps never more so than with his latest work.

“The Last Werewolf” stars Jake Marlowe, a 200-year-old, suicidal werewolf who is exhausted by life and also believes he is the last of his species. Duncan spoke with Reuters about his new book and the pressure to write a commercially successful novel.


Q. How did you develop this idea?

A. I had written seven novels before this, all of which were well received, but read by not enough people and they didn’t win a prize. So I had a conversation with my agent when it came around to writing novel number eight, and I said, “If I write another overtly literary novel, do you think you’ll be able to find a publisher?” And with a refreshing candor he said, “No, probably not.”

So in a bit of a bad mood, I decided to write a straight commercial genre novel. The idea was for a plot-driven narrative, no philosophy, no existential angst, no moral inquiry, no meta-fictional conceits. But as is often the way with these things, that’s not quite what happened. It was immediately apparent that it was a perfect vehicle for writing about the things I’ve always been writing about: love and sex and death and morality and cruelty and compassion.

Jake and Talulla are ruthlessly violent, yet sympathetic, characters. Was it difficult striking that balance?

The balance of mordant humor with serious moral inquiry and acts of grotesque violence, yes, I suppose that was difficult. And with these things the proof of the pudding is in the eating. You’re never quite sure whether it’s right until the whole thing’s done. And for some people it won’t be right, it will just be that in principal it is offensive to have these things in the same book. I have nothing to offer these people, because I don’t see the world in the same way.

Has inhabiting a 200-year-old character who is tired of life altered your appreciation for life expectancy?

I don’t think it’s radically altered it. I’ve always felt that life is very short, and my imperative is to deal with failure rather than with regret. That seems to be the choice - you either do things which might result in failure, but which at any rate you won’t regret because you’ll have actually tried them. Or you risk living with regret, and regret always seems worse to me.

Did your background as an ethnic Indian and a Catholic raised in Britain influence your interest in outsiders?

I did feel marginal. I did have a sense that I was looking on from the perimeter. And that, with whatever genetic predisposition there might be to having a writerly or observational approach to life, that was certainly a big factor.

As a successful literary writer, how much pressure is there to write a commercially successful book?

It’s a pressure that anybody who works for his or herself will be familiar with. Whatever else may be true, the bills still have to be paid. And it was becoming increasingly obvious the way the economic climate had turned around three years ago, if you were a literary writer who wasn’t already a household name, you rocketed to the top of the list of hilariously expendable items. It was clear that publishers were going to be less inclined to lose money on books. There are a lot of writers in my position who have published respectable work, but they’re living a hand-to-mouth existence.

When are you writing the sequel?