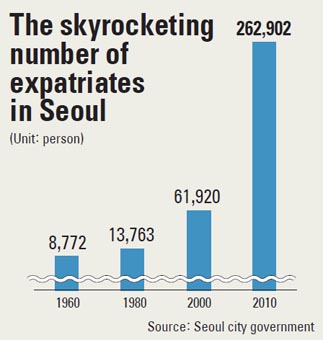 The number of expats in Seoul has increased 30 times since a half-century ago, according to the Seoul Metropolitan Government, suggesting that the capital is fast becoming a multiethnic society.

Through the years, the city has adapted to accommodate the influx of foreign visitors.

Although Seoul currently has many five-star hotels, with more business hotels planned, the situation is very different from what it was in 1960, when the city lacked high-quality accommodation.

The Sheraton Grand Walkerhill opened in April 1963 to much fanfare. Named after Walton H. Walker, the first commander of the U.S. Eighth Army during the Korean War, the hotel distinguished itself as the first hotel catering to U.S. soldiers. It had a capacity of 350 rooms and a casino.

With the U.S. Army in Korea stationed in Itaewon-dong, Yongsan District, the neighborhood became the first home to the city’s expats.

“After the U.S. Army was stationed near Itaewon, embassies and ambassadors moved to the area or to nearby Hannam-dong, and shops and bars opened to accommodate them,” Kim Sang-su, a curator of the Seoul Museum of History, said. “In the 1970s, when the oil shock occurred, the Korean government founded an Islamic mosque in Itaewon in cooperation with Middle Eastern countries in order to boost diplomatic relations with them, bringing many Muslims to the area.

“Starting in the 1990s, however, the government began reducing the size of the U.S. army in Korea and the increasing number of migrant workers to the country filled the vacuum left by the army,” Kim added. “Migrant workers from Southeast Asia or Africa flocked to Itaewon because rent was cheaper, creating a multicultural atmosphere.”

According to the city government, the most populous district for expatriates in Seoul is currently Yeongdeungpo District, southwestern Seoul, where about 39,000 expatriates live.

The majority of this group is ethnic Koreans who emigrated from China, or Joseonjok, who have formed Chinatowns in Daerim-dong and Singil-dong. These people usually have temporary jobs in factories in Gasan or Guro Digital Complex in Guro District.

“As globalization continues, more and more foreign laborers are entering Korea and joining the working poor,” Kim said. “At the same time, the city’s expat enclaves will begin to disappear as more and more foreigners move to other districts in Seoul, rather than to specific neighborhoods.”