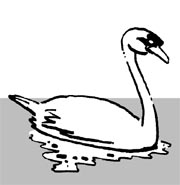 According to a legend, the mute swan is silent its whole life until just before death, when it sings one beautiful song. The tale has given humans the notion of the “swan song” - that final gesture one makes just before retirement or death.

With its long neck and white feathers, the swan has become a symbol of grace and beauty. However, the idea that a swan sings only once in its life is a scientifically ungrounded myth. Considered “winter’s guest of honor” in Korea, a swan can sing just like any other bird. It is true that, because of its long neck, a swan needs more energy to sing, so swans sing less frequently and at a lower pitch. But it does not necessarily sing right before dying. People have long known these facts but perpetuate the bird’s mysterious image anyway.

In Greek mythology, Zeus took the form of a swan and seduced Leda, and the story has inspired many artists throughout history.

Seventeenth century fabulist Jean de La Fontaine’s “The Swan Mistaken for a Goose” is about the last song of a swan. In the story, a swan is mistaken for a goose that was raised for its meat, and right before being killed, the swan sings in a beautiful voice, which saves its life.

There are also swan songs in politics.

When WikiLeaks divulged the contents of U.S. diplomatic cables, there was mention of a swan song. Alexander Vershbow, who was the U.S. ambassador to South Korea at the time, referred to the joint agreement signed by President Roh Moo-hyun and North Korean leader Kim Jong-il at an inter-Korean summit on October 4, 2007, as Roh’s swan song. Vershbow may have considered the inter-Korean summit as a political gesture, with a rather negative connotation.

Lately, there are many swan songs in Korean politics. Established politicians are struggling over candidate nominations for the Seoul mayoral by-election and both the Grand National Party and Democratic Party are about to sing swan songs. But the songs they sing will be more like funeral dirges than cathartic arias. Maybe this means there is a group of black swans slowly gathering that have the destructive power to turn politics upside down.