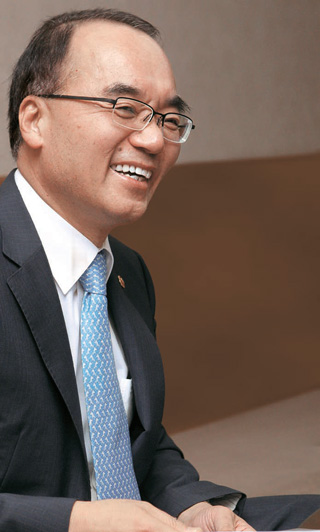 Minister of Strategy and Finance Bahk Jae-wan said he is against reviving a restriction on intergroup equity ownership in local conglomerates, an idea that has been discussed by politicians recently.

In an interview with the JoongAng Ilbo on Friday to mark the 100th day of his inauguration, Bahk said: “The issue of reviving the restriction needs to be approached with caution. In a global market, there is fusion and growing openness between and within different industries. The restriction could lower local companies’ competitiveness.”

The restriction was introduced in 1987 to prevent conglomerates from corporate sprawl. It was changed several times but basically limited inter-affiliate ownership to 25 percent of a company’s net assets. Under the law, a company cannot own a stake in its affiliate by more than an amount equal to 25 percent of its own equity. The rule applied to groups with assets worth 5 trillion won ($4.6 billion) or more. Local companies complained that the restriction discriminated against them because it only limited investments by local companies but not foreign companies. The restriction was relaxed by the Roh Moo-hyun administration and was completely abolished in 2009.

“The increase in the number of conglomerate affiliates is attributed to reasons such as exploring new business opportunities and expanding investments, and this shouldn’t be viewed too negatively,” he said. “However, those who damage market order through unfair transactions between affiliates will be punished in order to maintain fair trade and help small- and medium-sized businesses coexist with larger companies.”

Bahk said the Democratic Party’s plan to provide free meals, childcare and healthcare and halve college tuition would require much more than 17 trillion won a year, an amount the DP estimated. There needs to be a review of the DP’s scheme to finance the welfare plans, Bahk added.

The DP said if the government halves funding for 129 state projects whose execution was seen as unsatisfactory by the National Assembly Budget Office, it could save 2 trillion won per year. In response, however, Bahk said: “The budget office said the funding for only 19 projects needs to be reduced.”

The interview took place in the Bankers Club in Myeong-dong, central Seoul, on Sept. 7.

Q. Why did you withdraw tax cuts?

A. We’ve had fierce debates over tax cuts but I thought it was inappropriate to continue to fight over them even as we announce tax law amendments. [If our policy is not clear], it could make businesses feel anxious. We wanted to have a one voice on the issue.


The government position has been suddenly changed and it hurt the creditworthiness of our policies.

There were strategic reasons for reaching a compromise between the government and the ruling party right before announcing the tax law amendments. First of all, with the withdrawal of tax cuts, tax revenue will increase by 1.1 trillion won next year and 3 trillion won in 2013. I thought that when we announce next year’s budget later this month, it would be efficient to make ends meet and it would be also good for achieving financial soundness.

Since there is much uncertainty over the global economy, it was necessary to show the ruling party’s ability to lay out policies. If the government and the ruling party fight at the National Assembly until the end, we could have been viewed as incompetent. In a sense that “the have need to give in,” high-income earners and large companies may as well pay taxes at the current rate while small and midsize companies pay at a lower rate.


The framework of “MBnomics” was based on growth and business friendliness and it was supported by tax cuts. Now the framework is in disarray. The business community says business is more difficult now than it used to be during the Roh Moo-hyun administration.

Speaking more accurately, tax cuts are not completely withdrawn, but are just temporarily suspended. That’s why the ruling party and the government described it as a “suspension of tax cuts” rather than “withdrawal of tax cuts.”

When financial soundness is achieved, we can continue with tax cuts.


Some say the withdrawal of tax cuts was prompted by the “Ahn Cheol-soo syndrome.”

That’s not true. It was decided even before the Ahn Cheol-soo syndrome started. Because of confidentiality, we did not inform the public but there was an ongoing discussion. I made up my mind two weeks ago.

In the end, was it the Blue House’s decision?

Let’s talk about inflation. The Fair Trade Commission and the Ministry of Knowledge Economy are all involved in fighting inflation. Who is in charge of inflation policies?

I understand the point. Unlike developed countries, there is a price bubble and manipulation caused by market dominance in Korea. So it is not the best solution to leave it all up to the market. Just as the government verbally intervenes in the foreign exchange market, applying visible pressure on market participants is inevitable. I would pay attention to opinions that the government is twisting businesses’ arms.