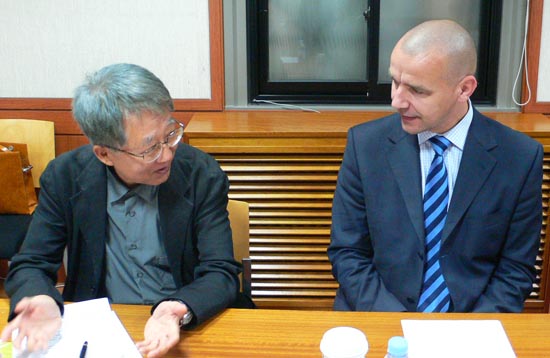 
With plans to open a branch in Seoul in 2013, the National Museum of Contemporary Art (MOCA), in Gwacheon, just south of the capital, is seeking to make contemporary art more accessible to the general public.

To help it achieve its goal, the museum reached out to Godfrey Worsdale, director of the Baltic Center for Contemporary Art in Gateshead, England. The museum is preparing to host the prestigious Turner Prize exhibition next month as part of a broader effort to expand its audience and educate visitors about contemporary art.

The museum invited Worsdale to give a presentation on the role of museums in the 21st century yesterday at MOCA.

A day ahead of the presentation, Worsdale and Bae Soon-hoon, MOCA’s director, spoke with the press at the Deoksu Palace Museum about how the Baltic is cultivating new audiences through its hosting of the Turner Prize exhibition. He also offered his advice on what MOCA can do to better engage the Korean public.

The Turner Prize, established in 1984 and named after painter J. M. W. Turner, is one of the few prestigious art awards that is also widely known among non-art experts. It is awarded to British visual artists under the age of 50. Damien Hirst, a well-known installation artist, was one of the four artists nominated for the prize in 1992 and was awarded the prize in 1995.

Each year, an exhibition of work by the four nominees is held at the Tate Britain in London in October and the winner is announced in December.

This year, however, the exhibition will be hosted by the Baltic.

To promote the exhibition to a broader audience, the Baltic launched a mobile cafe that traveled to beaches, villages and festivals in and around Gateshead this summer. The Turner Prize Cafe offered coffee and information about the exhibition in a casual environment designed to make people more comfortable with art.

Whether visitors go to the cafe for coffee or information about the exhibition is not as important as the fact that they were in an art space. And he says the same is true when people go to a museum, even if the primary purpose of their visit is not to appreciate art.

“If someone goes to the cafe 10 times, these are valuable visits, because people feel comfortable enough to be in the institution,” he said.

Asia is the next hot spot for contemporary art, after Paris, New York, London and Berlin, Worsdale said, and offered his advice on what museums in Asia can do to prepare for the shift.

Education is key, he said, but educating museum staff is just as important as educating the public, especially museum guards who are often the first people museum visitors seek when looking for information.

“At the Baltic, those people are the educators,” Worsdale said. “They are trained to understand the art, work with the art, and they are also now trained to read body language, so they can assess how comfortable visitors are in the gallery and can determine how much care they need to take to introduce visitors to the art.”

Worsdale encouraged MOCA to incorporate works by both experienced and emerging artists.

“Museums should be brave and confident, and they should be able to give opportunities to very young artists, who often make the most exciting works,” Worsdale said. “This combination gives the programs gravity and liveliness and excitement.”

Museums should also find a balance between works by Korean and foreign artists, he said.

“I think international museums need to find that balance,” Worsdale said. “And if the museum is successful, it will not [just] show works by Korean artists next to foreign artists. It will work in a way that local artists can become part of the global artistic community.”

He also pointed out that providing education programs for children is crucial in expanding a museum’s audience, as children are often the ones who bring a family to a museum.

“It’s a way of making a ‘Baltic bubble,’” Worsdale said. “It always makes me smile [when I see] children and parents become involved in drop-in art classes on Saturdays. Families come and spend time together, and art becomes more familiar. They come to the Baltic three, four times, and it becomes their gallery. That’s the moment you feel you’ve succeeded.”