Artistic couple gets ahead on hats

Artistic couple gets ahead on hats 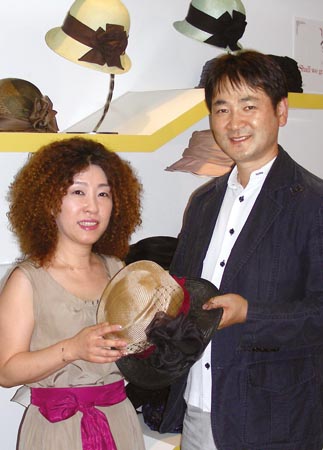 Shirly Chon and her husband Hyun-jong Cho, both 47, made a major change to their lives in July when they chose to move out of Seoul and back to their hometown in Jeonju to build a museum dedicated to their shared passion for hats.

“This is the first museum in Asia and the fifth in the world that is dedicated to hats,” Chon said. “We want it to be a place that will inspire creativity in the minds of our visitors and make them feel as if they are characters in a fantasy movie.”

Chon and her husband are known as the “hat professor couple,” with good reason. Chon is one of the top hat designers in the country. It was during her years studying literature abroad in France that she first opened her eyes to the art of hat making.

“I had loved art and handicraft from an early age,” she said. “But it was when I arrived in France, a completely foreign country, that I realized my passion for hats. From this serendipitous encounter, I chose to make a bold change in my career path.”

Chon was the first Asian woman to graduate from CMT in Paris, a professional hat school. She gained recognition in Korea after returning home in 1993 to introduce a line of fashionable high-quality hats. She has around 2,000 VIP clients in Korea, consisting of famous pop stars and actors.

Her husband, Cho, received a degree in hat business management in 2009, having spent time researching the marketing and advertisement strategies for hat products. Around 10 years ago, the couple opened Luielle, now a widely known franchise with more than 40 stores worldwide.

“In the future, we plan to engage in diverse cultural initiatives related to hat products,” the couple announced.