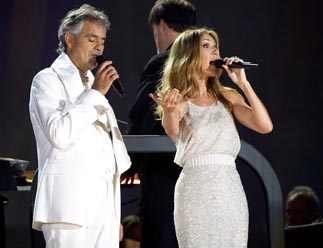 NEW YORK - Star singer Andrea Bocelli dazzled thousands with his signature brand of pop and opera in a cold, wet night in New York City’s Central Park, which will be etched in his memory as an important career milestone.

The Italian tenor considers Thursday’s free concert, which 60,000 had been expected to attend, as one that keeps him squarely in the footsteps of other opera stars including Luciano Pavarotti and Placido Domingo who also have performed at the famed park.

“Most of [my] important milestones happened in New York,” the 52-year-old told Reuters through an interpreter before the concert.

Bocelli, who has sold 70 million records worldwide, has performed at other famous New York venues including Lincoln Center and Madison Square Garden. But a free concert in Central Park is always a special event for performers as well as New Yorkers.

“This is something I’m doing for the city,” he said.

Among the biggest concerts held in Central Park were the ones by Garth Brooks in 1997 and Paul Simon in 1991. Each of them drew more than half a million people.

The music accompanied by the New York Philharmonic was a mix of well-known arias such as “La donna e mobile” and Italian and American pop songs.

The crowd jumped to their feet late in the show when pop star Celine Dion arrived on stage in a glittery, white gown to sing a hit duet she recorded with Bocelli, “The Prayer.” That was followed by a duet of “New York, New York” with American crooner Tony Bennett.

Bocelli closed out the night with his signature song “Con te partiro (Time to Say Goodbye)” and Puccini’s “Nessun dorma” to standing ovations.