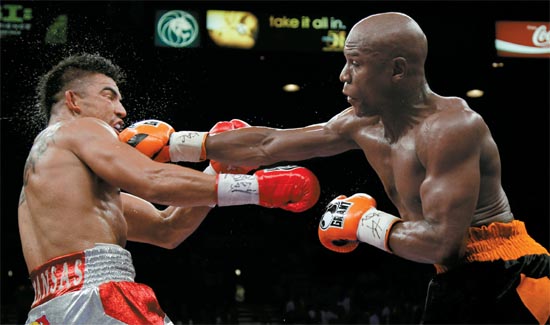 Floyd Mayweather Jr. knocks out Victor Ortiz with his devastating right during their World Boxing Council welterweight title fight on Saturday in Las Vegas. Ortiz went down in the fourth round. [AP/YONHAP]


LAS VEGAS - In just one round, Floyd Mayweather Jr. got a head butt, a kiss and a hug from Victor Ortiz before responding with a contentious punch that knocked out his opponent and put the World Boxing Council’s welterweight belt back around the American’s waist.

Mayweather remained unbeaten and did it in emphatic fashion Saturday, stopping Ortiz three minutes into the fourth round.

In the decisive fourth round, Ortiz appeared to head butt Mayweather intentionally, prompting referee Joe Cortez to take a point away from him. After the head butt, Ortiz went to embrace Mayweather and gave him a kiss on the cheek.

Seconds later they were in the center of the ring ready to resume action, briefly embraced again, then Mayweather delivered two punches that dropped his opponent and Ortiz was counted out as he tried to get back on his feet.

Ortiz claimed he was hit by a punch before Cortez had asked the fighters to continue.

“I took the break by the referee and I obeyed exactly as I was told,’’ Ortiz said. “And then, boom, he blindsided me.’’

“There’s two ways to look at it but as far as I was concerned I came here to entertain the fans and they were entertained,’’ Ortiz said. “There was a miscommunication with the referee but nobody is perfect and this was a learning experience.’’

“We touched gloves and we were back to fighting and then I threw the left and right hand after the break,’’ Mayweather said. “In the ring you have to protect yourself at all times.’’

Cortez saw nothing wrong with the timing of Mayweather’s winning punches.

“Time was in, the fighter needed to keep his guard up. Mayweather did nothing illegal,’’ Cortez said.

Mayweather was winning the fight through three rounds, dominating with speed and landing good right hands to the head of Ortiz. He won all three rounds on two ringside scorecards, and two of three on the third.

Ortiz picked up the pace in the fourth round, trying desperately to get inside Mayweather’s vaunted defense. He did on occasion and was having a better round when, late in the round, he appeared to intentionally head butt Mayweather as the two fought in Mayweather’s corner.

“He did something dirty when it was his corner who said I was dirty,’’ Mayweather said. “But I won the fight.’’

Mayweather, a 5:1 favorite in the fight against a champion 10 years younger, had vowed to go right after Ortiz and give the fans who purchased the pay-per-view showing at home an exciting fight. He mostly delivered on that promise, landing some good right hands in the early rounds and winning exchanges with his quickness.

Mayweather could face Manny Pacquiao next May should Pacquiao win his November fight with Juan Manuel Marquez and the two finally agree to a bout.