Bennett shakes off decades at Met with a cappella show

Bennett shakes off decades at Met with a cappella show 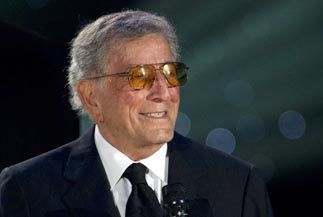 The legendary crooner celebrated his milestone birthday with a star-studded concert at the Metropolitan Opera House on Sunday, looking youthful and spry as he performed for more than an hour without taking so much as a water break. He danced, told jokes, and sang duets with Aretha Franklin, Elton John and Alejandro Sanz for a capacity crowd that included Robert De Niro and Katie Couric.

“I think it is amazing. He is amazing. This just goes to tell you nobody under 85 can complain about [anything],’’ said Whoopi Goldberg, who was also in attendance. “Don’t tell me you are tired. I don’t want to hear it. Tony Bennett can sing a cappella in the Met.’’

Former president Bill Clinton kicked off the evening’s festivities. He said he and his wife, U.S. Secretary of State Hillary Clinton, also in attendance, have been long time fans of Bennett’s music and art.

Bennett, whose birthday was Aug. 3, then took to the stage and performed hits such as “The Best is Yet to Come,’’ “Everybody Loves a Winner’’ and “I Left My Heart in San Francisco.’’

He dedicated “The Good Life’’ to his good friend, Lady Gaga.