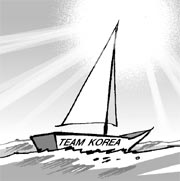 In 1995, red socks suddenly became popular in New Zealand because they were the trademark of yachtsman Peter Blake, who always sported his “lucky red socks.” Sir Blake was the skipper of the New Zealand yacht team in the America’s Cup, defeating the defending American team in the final. To New Zealanders, the victory was considered even more glorious than winning the World Cup.

The America’s Cup, which is the world’s most prestigious yachting competition, has been swept by American teams every year but one since the first event in 1851. Since the 1980s, Australia, Switzerland and New Zealand have won the race once or twice.

The race is dominated by affluent countries, as it requires both money and technology. It is basically a competition among yacht clubs and the boats need to be constructed using the technology of the country represented by the team. In the race, the sailboats compete head to head, using the winds. It is a sport of navigation, geography, physics and cutting-edge technology. Of course, spirit and wisdom are also essential. Russell Coutts, skipper of Team New Zealand since 1995, said that he has to use all of his knowledge in mathematics, trigonometry and physics once the boat has set sail. And the economic impact of the America’s Cup is the third-highest among major sporting events, after the Summer Olympic Games and the World Cup.

Through its participation in the race, Team Korea has helped write a new chapter in the history of Korean sports. In Team Korea’s first appearance in the America’s Cup World Series leading up to the 34th America’s Cup in 2013, it achieved a significant result. In a race that took place Sept. 10 to 18 in Plymouth, England and was broadcast all over the world, Team Korea finished third among nine teams. The 14-meter-long catamaran bearing the name “Team Korea” sailed against the waves at 30 knots.

Team Korea will participate in the America’s Cup World Series of races in 10 cities around the world until the 34th America’s Cup in San Francisco in 2013. Because there are not many competitive Korean sailors, Team Korea is made up of five foreigners and two Korean yachtsmen in their 30s. While the other teams have corporate sponsors like Rolex and Oracle, Team Korea does not have a sponsor. Despite these disadvantages, the team has already proven its passion and pioneering spirit. I wish the team the best of luck in the upcoming races.