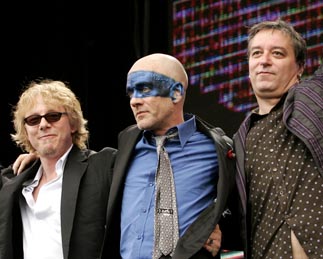 LOS ANGELES - R.E.M, once dubbed “America’s Best Rock ’n’ Roll Band,” said on Wednesday they had decided to “call it a day” after more than 30 years of generating hits and selling millions of records.

Key members of the band, whose hits include “The One I Love” and “Losing My Religion,” addressed fans in a posting on their Web site, thanking them for their loyalty and saying they have astonished even themselves with their accomplishments.

“To our fans and friends: As R.E.M., and as lifelong friends and co-conspirators, we have decided to call it a day as a band.

“We walk away with a great sense of gratitude, of finality, and of astonishment at all we have accomplished. To anyone who ever felt touched by our music, our deepest thanks for listening,” the band said in its posting.

But even without Berry, the band continued to make records and tour.

Their debut album, 1983’s “Murmur,” helped them build a cult following among America’s youth, and they crossed over to mainstream success with 1987 hit single, “The One I Love” off the album “Document.”

In December of 1987, Rolling Stone magazine put the band on its cover and dubbed it “America’s Best Rock ’n’ Roll Band,” and after that came years of successive hits.

“A wise man once said - ‘the skill in attending a party is knowing when it’s time to leave.’ We built something extraordinary together. We did this thing. And now we’re going to walk away from it,” Stipe said in the statement.

Bassist Mills said that while making “Collapse Into Now” and on their recent tour to support the album, the band mates began asking themselves what would come next. They felt that the songs from that record drew “a natural line” between their work as a group and their future as individual artists.

“We have always been a band in the truest sense of the word. Brothers who truly love, and respect, each other. We feel kind of like pioneers in this - there’s no disharmony here, no falling-outs, no lawyers squaring-off. We’ve made this decision together, amicably and with each other’s best interests at heart. The time just feels right,” Mills said.