Trace the steps of your favorite drama stars

Trace the steps of your favorite drama stars 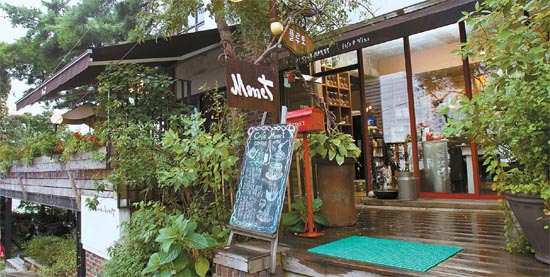 Cafe Monet, located in Pyeongchang-dong, central Seoul, was one of main locations used in the hit drama series “The Greatest Love.” [JoongAng Ilbo]


One weekday afternoon last month, Cafe Monet, located in Pyeongchang-dong, central Seoul, was empty but for one couple. Curiously, the couple was leaving behind the beautiful terrace seats, which are surrounded by a lush garden and always the first to be occupied, to make their way to a table in a far off corner of the cafe overshadowed by a huge mural.

“This is where Gu Ae-jung sat,” the woman whispered to her boyfriend. “And this is where Yun Pil-ju confessed his love to Ae-jung.”

The couple forgot about drinking their coffee but instead spent a great deal of time taking photos in front of the mural.

For the couple, who identified themselves as ardent fans of the series “The Greatest Love” which came to an end in June, visiting the cafe, one of the main locations where the hit drama was filmed, was a way to enjoy the drama all over again.

Locations linked to dramas like these have become tourist magnets for the growing number of K-pop fans worldwide who come here to trace the steps of their favorite stars.

The increase in revenue from tourism has in turn caused many of the featured locations to make changes to their business in order to better cater to customers looking to replicate the drama experience.

“It seems like drama fans prefer locations that have stories rather than ones that are just wonderful places,” said Cho Su-hyun, 31, author of the newly released book “Drama in Seoul.”

Another place that has become popular through its appearance in television dramas is a somewhat run-down little restaurant in Cheongpa-dong, central Seoul.

Although Ssangdaepo Sogeumguyi has been famous through its appearance in numerous dramas and films over the years, it became even more well-known when it was featured on “Secret Garden,” which aired in January.

Not only has the drama brought tourists to the restaurant, it has brought about changes in the menu.

In the drama, the main character, Gil Ra-im (Ha Ji-won) orders pork skins at the restaurant and she encourages Kim Ju-won (Hyun Bin), a wealthy department store owner, to try them. He eats the dish to impress her.

Drama locations have been drawing tourists to the country since the early 2000s, prompted by the popularity of “Winter Sonata” in 2002. It has been about a decade since that drama ended, but Nami Island, the drama’s main location, still draws a throng of visitors year round.

In essence, the drama turned an island that was on the verge of shutting down into one of the most successful tourist attractions in Korea, which in turn has inspired other cities to invest in attracting drama production companies.

We’ve chosen seven popular tourist attractions related to the hottest TV dramas. Load your music player with your favorite drama soundtrack and head out to some of these locations to lose yourself in the fictional world of your favorite series.

Cafe Monet was featured more than three times per episode during the 16-episode series “The Greatest Love,” in which A-list actor Dokgo Jin (Cha Seung-won) falls in love with a washed-up singer, Gu Ae-jung (Gong Hyo-jin), from a now-defunct girl group. In the drama, the name of the cafe was Pluto and it was run by Ae-jung’s close friend Jenny (Lee Hee-jin).

About three months have passed since the drama’s final episode but the cafe is still always crowded with drama fans who visit from as far away as Japan and China. The most popular table at the cafe is in a corner next to a huge mural, because that’s where characters of the drama would always sit and talk, and tourists always crowd the table for photos.

Another stop for “Greatest Love” fans is the Kim Jong Young Museum, which was featured in the series as Dokgo Jin’s luxurious house. The museum is a five-minute walk from the cafe.

After Kim Ju-won and Gil Ra-im from “Secret Garden” drink cups of a mysterious liquor, provided for free by a restaurant owner on Jeju Island, they wake up the next morning at a jjimjilbang to find they have switched bodies.

The bathhouse is actually located in Hannam-dong, central Seoul, not on Jeju, and has been featured in many other hit drama series including “Lovers in Paris” (2004), “I’m Sorry, I Love You” (2004) and “Brilliant Legacy” (2009). Shooting of “Secret Garden” took place on the first and fourth floors of the facility.

The surreal place where Dokgo Jin confesses his love for Gu Ae-jung in “The Greatest Love” was Lotte World’s Magic Island, which is an open-air unit of the indoor amusement park. In the drama, castles and other Magic Island attractions glowed with rays of light even after operating hours. Dokgo Jin brags to Ae-jung in the pivotal scene that the lights of the amusement park never go off because he’s a top star.

Visitors can enjoy the lights of Magic Island year round, but through October the amusement park will turn the lights on at 6:30 p.m.

This six-story building was also used in “The Greatest Love,” where it was featured as Dokgo Jin’s and Gu Ae-jung’s management agency. Shooting of the drama took place on the second and the fifth floors. In reality, the building is used as a showroom for many companies.

Unlike the fifth floor, which is open to the public, the second floor, which is used as a reception room for visitors, is closed. The building was where the two main characters secretly met and developed their relationship.

Kim Nana (Park Min-young) of the drama series “City Hunter” is always optimistic, despite juggling a number of part-time jobs while serving as a bodyguard at the Blue House. She lives in a run-down apartment with her dog.

The apartment building where she lived is located in Seodaemun, central Seoul. Built in 1971, most of the buildings in the apartment complex were demolished and just a couple of buildings remain.

Like the other remaining buildings, the one where Kim Nana lived looks like it is going to crumble, so the climb up to the third floor where her apartment was located can seem a bit precarious. Still, many visitors make the trip safely.

Those willing to venture up to the sixth floor will be rewarded with a view of the swing where Kim Nana and Lee Yun-seong (Lee Min-ho), who played an agent working for the Blue House, kissed. After the drama series finished, Park and Lee announced they had become a real-life couple.

Go to Seodaemun Station, line No. 5, exit 1. Take village bus No. 2 and get off at Cheonyeon Ttranche Apartment Complex. Walk up about five minutes to an alley right in front of Shinil Supermarket. Geumhwa Sibeom Apartments will be on your left. 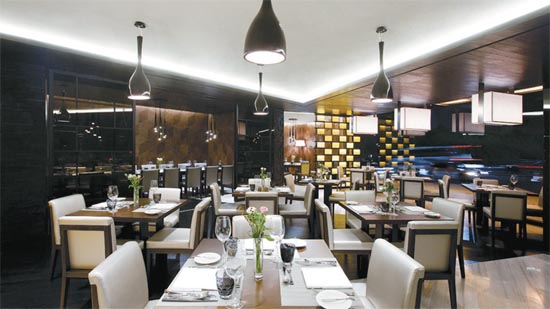 One of main locations used in the hit drama “Smile, Dong-hae” was the Camelia Hotel, which is in fact the Grand Ambassador Hotel in Jangchung-dong, central Seoul. The drama, which claimed a nearly 40 percent audience share during its run, revolves around Dong-hae (Ji Chang-wook), who was raised in the United States by his Korean adoptee mother. In hopes of finding his biological father, Dong-hae flies to Korea. During the course of his stay in Korea, Dong-hae works as a chef at the Camelia Hotel.

During the filming of the drama, the hotel said it had an increase in foreign guests who had figured out the drama’s location and wanted to reserve rooms there.

The restaurant where Dong-hae worked has even adopted the fictional menu he created in the drama. Since changing its menu, the restaurant has reported receiving a flood of positive feedback from women customers in their 40s and 50s, who were the main viewers of the drama. 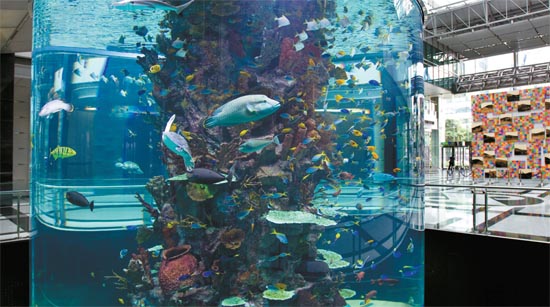 The main location of “Can You Hear My Heart” was Wookyung Group, the workplace of leading man Cha Dong-joo (Kim Jae-won).

The actual building that was used for the drama is Posco Center in Daechi-dong, a wealthy business district in southern Seoul, and its main feature is a huge cylindrical aquarium that takes up the basement and first floor.

Cha Dong-joo, who can’t hear but pretends that he can, and his love interest Bong Woo-ri (Hwang Jung-eum), who is in charge of caring for her mentally challenged father, often met in front of the aquarium. The aquarium boasts about 2,000 different marine animals, including sea turtles, sharks and about 30 species of coral. The aquarium stands tall at nine meters and is five meters in diameter.