Stone by stone, father and son lay down a legacy

Stone by stone, father and son lay down a legacy 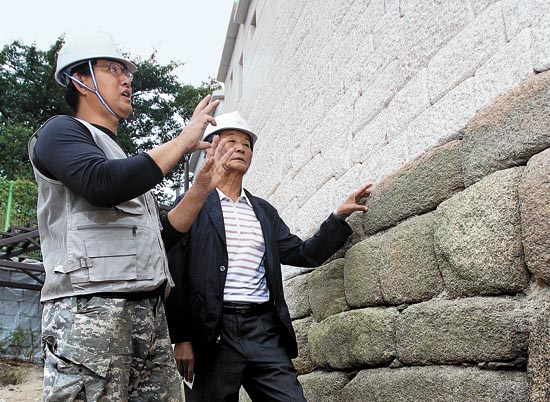 Gang Sin-gak, 71, right, looks around Hanyang Fortress, which is undergoing a major restoration, with his eldest son Seok-ju, on Monday. By Kim Do-hoon


As stonemason Gang Sin-gak, 71, looked around Hanyang Fortress in Jongno District, central Seoul, earlier this month he checked various details and offered bits of advice to his eldest son, Seok-ju, 41, also a stonemason. The fortress is undergoing an extensive restoration, a project that is Gang’s life’s work. He’s spent the past 36 years working to restore the fortress to its former glory, and the project is nearly complete. His son has worked with him for the past 15 years.

“Building a fortress is not simply a matter of piling up stones,” Gang told his son. “By putting each stone in its place, they will all fit together tightly.”

The 18.6-kilometer-long fortress was built during the early Joseon Dynasty. It was damaged during the Japanese colonial era and again during a modernization project in the 1960s and 70s. In 1975, the Seoul government launched a project to restore it.

“I left my home in Yesan, South Chungcheong, when I was 19,” Gang said in an interview with the JoongAng Ilbo on Monday. “And then I came to Seoul and got a job at a quarry in Suwon.”

He got his stonemason’s certificate in 1968 and his first government-run project was to restore the fortress wall linking Changui Gate to Sukjeong Gate in Seoul. Since then, he has worked on Hanyang Fortress.

Seok-ju said that when he was a child he tried to dissuade his father from the grueling work. “But his passion for the fortress was infectious and I found myself interested in the work as well,” Seok-ju said.

At first, his father tried to discourage him from the profession, saying, “The job isn’t easy and it’s not something that just anyone can do.” But Seok-ju had made up his mind.

Seok-ju says that at work, his father is a strict teacher, which is necessary to accomplish their goal.

To restore the fortress, the crew has to move about 400 or 500 kilograms of granite from Pocheon, Gyeonggi, to Seoul. After the stonemasons trim each stone, the stones have to be piled up and cemented together.

“You have to have to put your entire soul into it,” Gang said. “Without craftsmanship, you can never do it.”

Gang’s body bears the signs of his work in the form of a long scar leading from his right hand to his wrist. He got the scar 15 years ago when the calluses on his hand became so thick he was losing his range of motion. So he cut them off.

Seok-ju also has chronic pain in his back and legs.

Both father and son say they can endure the pain because of their passion for their work. And Seok-ju has another reason for continuing.

“My father’s spirit resides in the newly restored Hanyang Fortress,” the son said. “I want to follow in his footsteps and complete the job.”