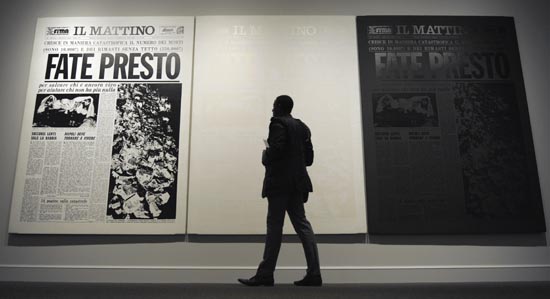 A man walks by Andy Warhol’s “Fate Presto, 1981” during a press preview of an exhibit of the artist’s work on Tuesday at the National Gallery of Art. It is one of two exhibits on the artist opening this month in Washington. [AP]


WASHINGTON - Fifteen minutes of posthumous fame just keeps going for Andy Warhol, the undisputed giant of Pop Art who is getting not just one, but two major exhibitions in the U.S. capital.

“Warhol: Headlines” at the National Gallery of Art focuses - for the first time - on the legendary New York artist’s fascination with front-page news and tabloid sensationalism.

“Andy Warhol: Shadows” at the nearby Hirshhorn Museum brings together 102 monumental silkscreened and hand-painted canvases - never before shown in their collective entirety - conceived from distorted photographs of shadows.

Both shows opened Sunday under the collective title “Warhol on the Mall.”

Born in Pittsburgh, Pennsylvania, to Polish immigrant parents, Warhol drew on his early experiences as a commercial designer to become one of the most important - and enigmatic - personalities in modern art.

He died in February 1987 at the age of 58, leaving so many possessions that it took auctioneers nine days to sell them all off.

He is best known for outsized portraits of celebrities, many of whom frequented his studio in Manhattan, although his talents extended into avant-garde filmmaking, Polaroid photography, writing and record producing.

About 80 pieces make up the “Headlines” show, which touches on such themes as airplane crashes, the assassination of President John F. Kennedy and the many love affairs of actress Elizabeth Taylor.

Some 40 percent of the show has never been seen before.

Setting the tone for the exhibition is Warhol’s groundbreaking “A Boy for Meg,” an oil-on-canvas reproduction of the New York Post announcing the news that Britain’s Princess Margaret had given birth.

From 1968, “Flash - November 22, 1963” recreates over the space of an entire wall news agency dispatches that revealed, minute by minute, Kennedy’s murder in Dallas, Texas, on that day.

“He is calling our attention to the fact that the media is feeding our appetite for the news, which is seemingly insatiable,” the show’s curator Molly Donovan told AFP.

“Warhol himself couldn’t get enough of the news,” she added, and indeed he was himself a regular fixture of the gossip columns.

“He wanted to show us that we’re responsible for the news, that the news in its contents are largely determined by us through our patronage, through our consumption and desires and fears.”

“Headlines” closes at the National Gallery of Art - which, rather appropriately, is close to the Newseum, a museum dedicated to news gathering - on Jan. 2.

While “Headlines” draws from the earlier stages of Warhol’s fame, “Shadows” emerged in the last decades of his life.

Rich in blues, grays and reds, the 102 canvases will be installed edge-to-edge and run uninterrupted for almost 450 feet around the Hirshhorn’s galleries.