The power of music resonates in Korea

The power of music resonates in Korea 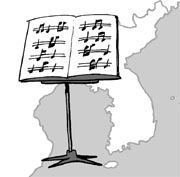 Is music political or not? Since we do not say “leftist music” or a “melody representing conservatism,” music may be free from political inclinations. Musicians, however, likely have political tendencies and can give their music political undertones. Music can also become political based on how it is used and by whom.

A case in point is Adolf Hitler’s fondness for the music of Richard Wagner, who was known for his anti-Semitism. If Hitler had not been so fond of Wagner’s music, Israel would not have banned performances of Wagner’s music for decades. The music may not be at fault, but Israel’s hatred of Wagner is very serious nevertheless. A concert by the Israel Philharmonic Orchestra in 1981 illustrated this well. Conductor Zubin Mehta was about to begin Wagner’s “Tristan and Isolde” overture as an encore. But he had to stop the concert when the angry audience protested that victims of the Holocaust had been forced to march to the gas chamber as Wagner’s music played.

Recently, Chung Myung-whun, conductor of the Seoul Philharmonic Orchestra, announced he had made an agreement with Pyongyang artists on holding regular concerts by orchestras from both the North and the South. Chung said he is hoping one of the pieces performed will be Beethoven’s Symphony No. 9, which is famous for the final choral movement that uses lyrics from Friedrich Schiller’s poem, “Ode to Joy.” I hope Chung is able to achieve his ambitious goal and that the strains of “Ode to Joy” will soon reverberate throughout the Korean Peninsula.