Coming to Korea to see the doctors

Coming to Korea to see the doctors 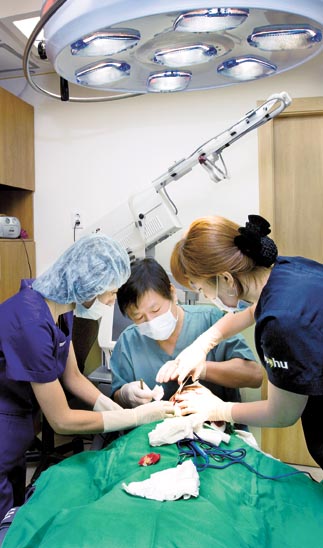 When New Zealander Jacky Ng, 21, felt it was time to achieve his desire of having a higher nose and bigger eyes, he went online to research the best place in the world to get cosmetic surgery.

Ng’s search led him to Korea, which he had never visited. After much consideration and long-distance consultations with surgeons, Ng finally realized his dream of having facial features “like a Korean actor.”

“I thought about getting my eyes and nose done either in Thailand, Korea or in New Zealand, but Korea seemed like the safest place for plastic surgery and the price was also affordable,” said a bruised Ng on a final post-operation check at the Real Cosmetics Clinic in Apgujeong-dong, southeastern Seoul, early this month the day before his flight back to New Zealand. “I’m very satisfied with the result but I’m nervous about going back because my parents and friends don’t know I came to Korea to have plastic surgery.”

Ng paid a total of $10,000 for a two-week-long surgery vacation in Seoul, including airfare, medical expenses and accommodations. Ng had no trouble communicating with doctors at the clinic because there was a doctor who could speak fluent English.

People like Ng, who want medical services that are better, cheaper and more quickly available than at home, are jetting around the world in rising numbers.

In Asia, hospitals in Singapore, Thailand and India have been attracting foreigners from across the globe for treatments such as heart bypasses, spinal surgery, hip-joint replacements and cosmetic surgery, because the treatments can be done more cheaply and with much shorter waiting times. According to Ng, his surgery was one-third the cost in New Zealand and said he was amazed how quickly he could get an appointment after making up his mind to go through with it.

Although it’s a relative newcomer to the medical tourism field, Korea is aiming to become a major player. 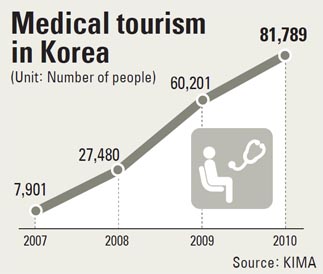 The number of foreigners coming for treatment began to rise in 2008, especially for cosmetic surgery, as the Hallyu, or Korean Wave of popular culture, spread further around the world.

On May 1, 2009, the government revised the country’s medical law and designated medical tours as a major initiative to boost Korea’s tourism industry.

According to Korea International Medical Association (KIMA), a total of 81,789 foreigners visited Korea last year for treatments, a 36 percent increase from 2009. The most were from the United States, accounting for 32.4 percent last year, followed by 19.4 percent from China and 16.8 percent from Japan.

Medical tours to Korea are concentrated on cosmetic surgeries, but there has been growth in other procedures.

A 23-year-old Danish college student identified as “A,” who requested anonymity, arrived in Seoul last week from Japan, where she is studying, to receive a hairline advancement procedure to correct a very high hairline at a clinic in Seoul. It was her second trip to Korea. A month ago, she had surgery to raise her nose and narrow her jaw line. While in Seoul for the first surgeries, A talked to the consultants at the Korea Medical Hub, a medical tour agency that helps foreign patients in Korea, about hair transplant.

“My hairline is quite high it makes me look like I have the widest forehead,” said A. “For a long time, I thought hair transplants were for old, balding guys. I asked the doctor and he said a lot of his patients were young females. After hearing that, I felt less embarrassed.”

A was very happy with her experience in Korea.

“I actually thought about having plastic surgery for about five years but I don’t even know if there are such clinics in Denmark,” said A. “I thought it was gory and didn’t really know much about it. But when I went to Japan to study three years ago, my friends told me about plastic surgery in Korea.”

A said that two of her friends in Japan and China, who had double-eyelid surgeries told her Korea was “the place with the best techniques and experience.” A said her treatments were one-third the cost in Japan.

Foreigners are also visiting Korea for infertility treatments. The Seoul Rachel Fertility Center is run by three female doctors on the second floor of the Lotte City Hotel in Mapo District, Seoul. The center specializes in artificial insemination and external fertilization.

As soon as the Seoul Rachel Fertility Center opened, foreigners began knocking on its doors. Fertility treatments costs about 5 million won, one-sixth the cost in developed countries such as the United States. Patients from abroad stay at the hotel while receiving treatments such as external fertilization, which takes about two weeks.

“Clients need to rest after receiving embryo transfers, so rather than getting hospitalized, patients stay at the hotel during the treatment period,” said Lee Hee-seon, 43, director of the Seoul Rachel Fertility Center. “As the hotel has numerous facilities including restaurants, a cafe, a spa and a gym, patients from abroad can enjoy a relaxing time without having to go outside the building.”

Other medical procedures done by foreigners include dentistry, surgeries for cancer, dermatology and laser-assisted in-situ keratomileusis, or LASIK eye surgery.

To rev up the medical tourism industry, the Incheon city government held an inauguration ceremony of the Incheon Medical Tourism Foundation late last month in the Songdo International Business District in Incheon. In June, the foundation began employing staff, including a director, secretary general and marketing experts targeting countries including Russia, Japan and English-speaking countries.

However, analysts said there are still some obstacles Korea has to overcome to become a leader in medical tourism in Asia.

Jeong Seung-ho, CEO of Hu Care, a marketing firm that operates the Web site Korea Medical Hub, which was established in 2008, points out that the current structure of agencies that connects foreign patients with local hospitals or clinics is too complicated.

“The current structure of a foreign patient selecting an agency, which will connect him or her to a local medical center for a commission, is not a long-term model that establishes trust between patients and agencies,” said Jeong. “Agencies connect patients to medical centers that pay them the highest commissions, and patients don’t like that.”

Jeong said agencies should focus on “improving consumer satisfaction rather than pursuing bigger profits and establish partnerships with local hospitals or clinics rather than depending on commissions.”

According to Jeong, his Korea Medical Hub makes money from advertising, not commissions.

“Our Web site, which is in English, Japanese and Chinese, acts as a platform where foreign patients can browse for their desired ‘product’ while hospitals and clinics can offer competitive products,” said Jeong.

Moreover, the bigger the industry gets, the greater likelihood of disputes and malpractice suits.

Currently, the Ministry of Health and Welfare and the Korea Health Industry Development Institute are trying to get a bill on malpractice-related damage relief and medical dispute resolution passed in the National Assembly.

Currently, most clinics and hospitals are insured so that Korean patients can be compensated in case of medical disputes or malpractices. However, there are only a few insurance plans for foreigners.

“Foreigners, especially from developed countries, are hesitant to come to Korea compared to other countries in medical tourism, such as Singapore, because most Korean hospitals and clinics don’t insure foreigners,” said Jeong. “In order for Korea to attract more foreigners, the government should work on insurance plans for foreigners so that they feel more secure when receiving treatments in Korea.”

Jeong said that hospitals, agencies, patients and the Korean government should put their heads together to help the industry grow.

“In order for Korea to become a leader in medical tourism,” said Jeong, “hospitals and clinics should be transparent with their prices while the government has to try to establish policies while removing barriers.”