Classical music blossoms on the back of corporate support

Classical music blossoms on the back of corporate support 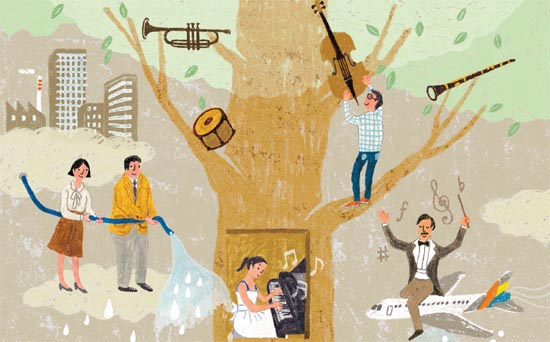 
Less than a week after returning from a nine-day European tour with the Seoul Philharmonic Orchestra this summer, Maestro Chung Myung-whun held a rare press conference to report on the success of the tour. But more importantly, the ordinarily media-shy conductor took it as an opportunity to announce his intent to solicit more extensive corporate sponsorship.

“We have achieved notable progress thanks to support from local enterprises,” the conductor of Korea’s leading orchestra said at the event on Aug. 2. “From now on, I will aim to attract sponsorship from not only Korea but all over the world. I can guarantee that we will achieve greater success if we garner a sufficient level of corporate support.”

The comments by the world-renowned pianist-turned-conductor, who has said many times that what he hates most is “begging for sponsorship,” indicate he believes that more companies are now ready to offer the kind of support that Hyundai Motor Company provided as the exclusive sponsor of the orchestra’s summer tour.

In exchange for its contribution, Hyundai Motor was able to increase its brand recognition in the countries where the orchestra toured in Europe, its second-most important market next to the United States.

Although the orchestra is run by the Seoul Metropolitan Government, it does not receive enough financial support to cover its operational expenses, including airfare and accommodations for guest artists from overseas, and must seek outside funding. It raises money through corporate donations and ticket sales.

Kim Jin-young, a spokeswoman for the SPO, said Hyundai Motor’s sponsorship of the European tour signals that mecenat, or sophisticated patronage, has taken one step forward in the country’s classical music arena.

“Corporate support for the SPO has mostly been limited to the purchase of a certain number of concert tickets in exchange for simply having the brand logo printed in programs and posters. It’s strictly give and take,” Kim said. “In that respect, the automaker’s support this time went beyond sponsorship. Patronage is a more accurate definition, I would say.”

It is just one example of the synergy that can be achieved through the combination of high-quality art and capital. And more classical music organizations are doing the same.

This year, the International Great Mountains Music Festival, an annual two-week classical music event held in late July in Pyeongchang, Gangwon, gained the sponsorship of 23 local and foreign companies - almost quadruple the figure from last year. And for the first time in its eight-year history, the festival was able to attract the sponsorship of foreign enterprises, including Italian luxury goods maker Tod’s, Swiss watch producer Breguet and French mineral water brand Evian. The means of support these companies offered varied. Some companies funded scholarships for students participating in the festival’s music school, while others hosted after-concert receptions.

“We are extremely excited to see so many companies willing to support the festival,” said Shin Myung, founder and chief executive of Communique Korea, the festival’s public relations agency. “Among the many genres of fine art, classical music concerts tend to attract relatively less corporate sponsorship because companies usually think the return on their investment isn’t exactly tangible. But I feel the overall atmosphere is moving in a positive direction.”

“It’s true that as more and more classical musicians present remarkable performances and attract a broader demographic, the corporate sector has begun paying more attention to them,” he said.

The notion of corporate sponsorship of the arts as part of social responsibility activities was adopted here later than in countries in the West, which had private companies involved in cultural philanthropy beginning in the 1960s and 1970s.

In Korea, the Korea Business Council for the Arts, with more than 180 corporate members, was established in 1994. Its key activities involve linking member companies with artists and groups and encouraging the companies to provide financial and other support.

A survey by the council in July showed that corporate sponsorship of the arts increased 10 percent last year to 173.5 billion won ($161.88 million) from the previous year, following a three-year decline in arts donations.

One reason for the increase in funding seems related to improvements in the economy, said Lee Byung-gwon, a manager with the council.

It takes more than money

Not only are corporations providing more money for classical music, they have also changed the nature of their contributions, with more corporations willing to engage in long-term, unconditional support for individual artists. And those initiatives are bearing fruit today.

One case in point is the victory of five young Korean musicians at the 14th International Tchaikovsky Competition in June. The musicians in the categories of piano, solo vocal and violin won awards ranging from gold to bronze. Having such a large number of winners from a single country was unprecedented in the prestigious competition.

Four of the five winning musicians are beneficiaries of the Prodigy Program run by the Kumho Asiana Cultural Foundation.

The Prodigy Program is devoted to supporting talented musicians under 14 who are chosen by audition. These artists are then offered financial aid and performing opportunities for an extensive period.

It is just one of two arts programs founded in 1998 under the leadership of Park Sung-yong, a classical music enthusiast who was the then chairman of Kumho Group, the predecessor of Kumho Asiana Group.

The other program is the Young Artist Concert Series, for musicians who are older than 15. Once selected, the musicians are offered their own recital at Kumho Art Hall in Gwanghwamun, central Seoul.

In the 13 years since the programs were launched, 1,000 musicians have benefited and many of them have since gained international recognition for their work.

Pianist Son Yeol-eum, 25, who won second prize in the Tchaikovsky Competition and is currently the nation’s most celebrated young pianist, was one of the first three beneficiaries of the Prodigy Program. She said she has received many benefits from the corporation, including a scholarship, business-class tickets on Asiana Airlines and Steinway & Sons and Bosendorfer grand pianos worth millions of won. But she said what she appreciated most was the nonmaterial support of the late chairman.

“Chairman Park is one of the most important figures in my life. I can vividly remember him giving me a standing ovation from the front row in each of my concerts,” she said in a recent interview with Forbes Korea. “He often invited me and my siblings to fine dining restaurants, through which we learned dining etiquette. I also learned how to play chess and drink wine. He tried to teach me even trivial things.”

After Park’s death in 2005, Kim Yong-yeon, executive director of Kumho Asiana Group, inherited the late chairman’s role at the foundation.

“The most important thing that a private company can do is create jobs,” Kim said. “The next is achieving the corporate philosophy laid down by the company’s founder. For Kumho Asiana, the top priority is contributing to the nation’s artistic and cultural progress. That, we believe, will eventually raise the nation’s brand image and will, in turn, help corporate growth. It’s a virtuous circle.”

Long-term investment in the arts

Other companies, large and small, have adopted their own ways of supporting the arts.

Samsung Foundation, for example, has rented its four Stradivarius violins and cellos to reputed artists for free since 1997.

Meanwhile, the Daewon Cultural Foundation has hosted an annual music awards ceremony and offered funds to musicians since 2004. Its chairman, Kim Il-gon, said he launched the foundation to “carry out mecenat activities with a pure love of classical music.”

When the Korea Business Council for the Arts asked 530 local businesses why they were engaged in corporate sponsorship of the arts in a survey conducted earlier this year, one-third of respondents said it was “to raise brand awareness,” while 31 percent said they wanted “to contribute to society.” Only 16 percent of those surveyed said that it was “to bring about progress in the cultural sector.”

But Lee of the Korea Business Council for the Arts noted that companies should not expect immediate results after sponsoring an artist.

“You should take the long view,” he said.

Pianist Son concurred: “We musicians play throughout our lives. I know that companies cannot help but think about the impact of their sponsorship, but I wish they would be more patient. Of course, the sponsored artists should be appreciative as well.”