Make sure you get the big picture

Make sure you get the big picture 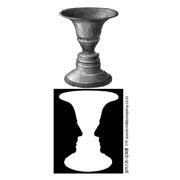 Rubin’s vase is a figure devised by Danish psychologist Edgar Rubin. It is a set of cognitive optical illusions that look either like a vase or like two faces looking at each other. Depending on which part you consider the figure and which you consider the background, the black and white areas separated by a common border can be interpreted in two ways. Both choices are valid. Most importantly, you can only see either the vase or the faces at one time, but you can never see them together.

The latest innovation in sports broadcasting is based on a similar kind of choice made by the viewer. One online television network, for instance, airs professional baseball games in a way that is reminiscent of Rubin’s vase. Two programs are offered for the same game, and viewers choose which broadcast they want to see depending on the team they are supporting. Viewers see commentary and images focusing on their chosen team - and nothing of the other side. The Web site has become very popular, but the overall trend leaves me with a bitter feeling because it seems like a consequence of a lack of social communication. Moreover, it aggravates disparity and division.

It is part of human nature to feel comfortable in a group of people with whom we can closely identify. But this can lead to division because one can increasingly prefer the company of people who share their views and interests. Cliques can develop, and as a consequence, members of other groups are shunned. And what really worries me is what kind of monster will be created as our tendency toward social segregation meets technology. In the world of “smart technology,” you are able to enjoy personalized services and the convenience of looking at, listening to and consuming only what you want.

With Rubin’s vase, you must choose between black and white. There is no place for gray. But no matter which you choose to see, the picture only makes sense because the other part also exists. This is a good lesson for life. If you only want to see one side of the story, you can, but it will be a little like watching that Web cast with reports on only one side of the game. Your side only exists because there is another. But if you want to avoid committing such a folly, you should always keep Rubin’s vase in mind.

*The writer is the J Editor for the JoongAng Ilbo.