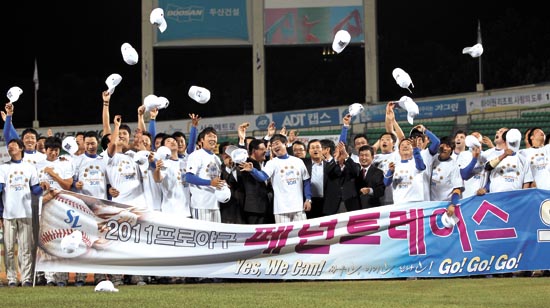 
Daegu Samsung Lions clinched the regular season title this week to book its ticket to the Korean Series for the first time since 2006.

The Lions, guided by manager Ryu Jung-il, beat Seoul Doosan Bears 5-3 at Jamsil Baseball Stadium in Seoul to mark a record of 76 wins, 47 losses and two draws as of Tuesday.

The Lions have eight games left to play but these are just a formality as the team has clinched the title even if Incheon SK Wyverns manages to win all eight of its remaining fixtures.

Ryu will go down as only the second manager in the history of the KBO to win the title in his first year as coach after his predecessor Sun Dong-yeol set the benchmark in 2005.

“I feel great,” Ryu said after the team’s victory on Tuesday. “I really appreciate what our coaches and players have done.”

The Lions, which ranked second going into the All-Star break, did not surrender their lead in the eight-team league after July 27.

As the regular season winners have consistently won the Korean Series since 2002, Ryu said he was not intending to fall at the final hurdle.

“This year went as planned,” said the manager, who spent 25 years as a player and a coach for the Lions. “We have successfully made our first step [to the championship], but we will have to prepare well to seal the deal.”

Baseball pundits point out that the Lions’ bullpen pitchers played a key role in the team’s success this season.

Their efforts meant the Lions only lost 19 games after building an initial lead during the 125 games played as of Tuesday, giving them the best record in the KBO.

Ryu pointed to Oh - now on his way to breaking his own Asian record in saves (47) - as one of the heroes.

“I didn’t know he would do this well before the season but he has recovered physically and kept us tight in defense.”

The team survived a rocky patch in April when injured pitchers abounded, but the coach said he can now rest players ahead of the Korean Series.

“I will try to adjust my training schedule to keep the players in peak condition,” he said. “It is going to be an interesting series.”