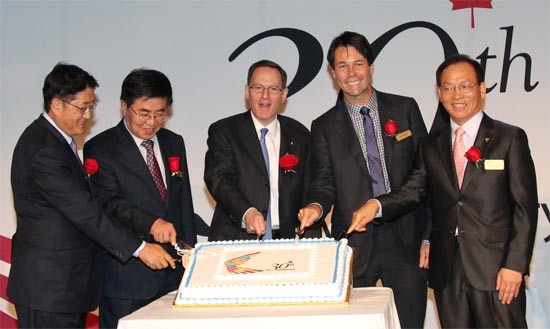 Korea Exchange Bank’s chairman and CEO, Larry Klane (center), stands with a group of bank officials and guests to celebrate the 30th anniversary of its subsidiary, KEB of Canada. The ceremony was held Tuesday at a Toronto hotel.

With him are Lee Chul-woo (far left), the senior executive vice president of Samsung C&T; Chung Kwang-kyun (second from left), consul general of Korea in Toronto; Eric Hoskins (second from right) Ontario’s minister of citizenship and immigration; and Park Chong-hyun, the chief credit officer of the bank. Provided by the bank