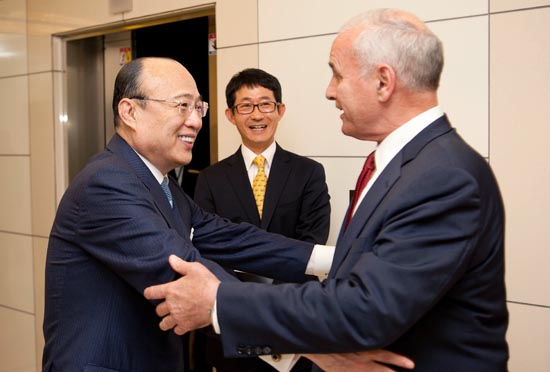 Dayton’s delegation of 35 people, including politicians and entrepreneurs based in Minnesota, are visiting Seoul this week to boost economic ties with Korean companies.

Hanwha invested $23 million in total to acquire the controlling share of the two American solar energy firms in September, hoping to raise Hanwha’s market share in the U.S. solar energy market in the future.

He said he was aware that Hanwha had entered the solar energy business in China and hoped that it would also increase its investments in the U.S. market as well.

Minnesota delegates and Hanwha officials discussed plans in solar energy and in other areas such as bioengineering, agriculture and stock-breeding.

Korea is Minnesota’s sixth-largest export destination and its 14th-largest source of imports, according to Hanwha Group.