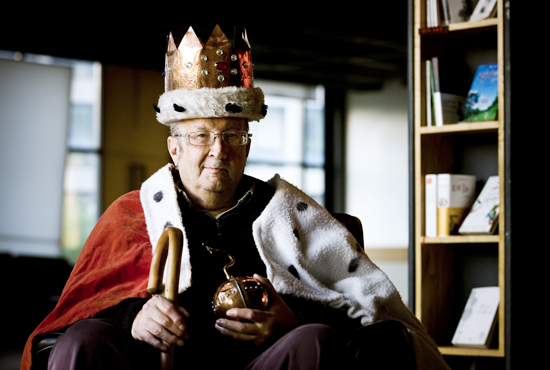 Richard Booth, 73, from the town of Hay-on-Wye in southeastern Wales, is visiting Korea for the Paju Book Sori Festival, which runs through Sunday. He is the self-proclaimed “King of Hay,” as he helped to make Hay-on-Wye famous for used book sales. In the picture, Booth is wearing the crown and gown he wore at his self-inauguration on April Fool’s Day in 1976. In his interview with the JoongAng Ilbo, he said that if the new book is for the ego, the used book is for the intellect. He added that producing new books that have more focus on the author may boost a domestic economy, but used books that have more focus on the subject can support the international economy. By Kwon Hyeok-jae