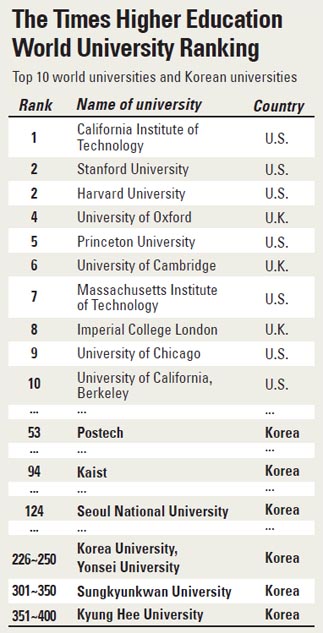 Kaist and Seoul National University ranked 94 and 124, respectively, to be included in the “World Top 200.”

Yonsei University and Korea University, meanwhile, were included in rankings’ “best of the rest,” placing in the 226-250 slot, while Sungkyunkwan University placed in the 301-350 slot. Kyung Hee University was in the 351-400 slot.

To celebrate its 46th anniversary, the JoongAng Ilbo is exclusively publishing the internationally recognized rankings in Korea as part of its annual college ranking series.

Harvard University lost the top spot that it had held for eight consecutive years to California Institute of Technology, which was ranked 2nd last year. Caltech managed to snatch the No. 1 place with a 16 percent increase in research funds since last year as well as a higher citation score. Caltech was followed by Harvard and Stanford, tied for 2nd. Oxford University in the U.K. passed Cambridge University to come in 4th. Cambridge placed 6th, one below Princeton University. The University of Tokyo, ranked 30th, was the highest ranking Asian university.

This year’s ranking for Postech, despite a higher citation score, dropped to 53rd from 28th last year. A low reputation score contributed to the drop.

Postech, however, received 92.3 points out of 100 for its citations, coming in 39th to tie with The University of Edinburgh in the U.K. and New York University.

Postech Professor Kim Ki-moon’s paper in Nature from 2000 was cited more than 1,800 times, the highest number of citations among papers written by a Korean as a lead author.

“The quality and quantity of research papers written by professors in Korea lag behind noticeably compared to foreign universities,” said Professor Suh Eui-ho of Postech’s department of industrial and management engineering, who is a member of the rankings’ advisory body.

“Universities that rely heavily on reputation when citation is worth 30 percent of total score will not be able to be included in the top 100 universities in the world.”

Phil Baty, editor of the rankings, said that Korean universities showed strength in financial areas, such as research funds from companies, but that the level of awareness was still lower compared to foreign universities.

Of the top 200 universities, 75 were in the United States and followed by 32 in Britain. Five universities in Japan were included in the top 200, the most among Asian countries.

The Times Higher Education World University Rankings is published both on the JoongAng Ilbo’s Web site at www.joongang.co.kr and at www.timeshighereducation.co.uk.