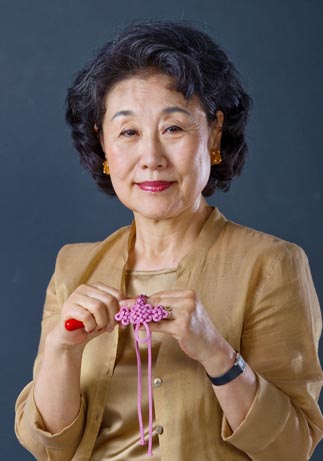 Kim Eun-young, an artist who creates maedeup, or traditional Korean ornamental knots, often spends more time in libraries and museums than in her workshop. There she examines old paintings, sculptures and documents to study how maedeup was used in old Korea, reproducing the earlier craftworks based on that research.

Kim has recreated hundreds of knot pieces in this way. “I have done this to bring Korean knot craft, known for its exquisite beauty, back to modern life,” said the 69-year-old artist, designated by the Seoul Metropolitan Government as a “human cultural asset.” Seoul, in 1996, named maedeup as Important Intangible Cultural Property No. 13 and designated Kim a master of the craft.

Kim’s latest reproductions are of ornamental items used for royal banquets during the Joseon Dynasty (1392-1910), including a jidangpan. She said jidangpan is a recreation of a lotus pond made on a wooden table and used for decoration during parties. Her jidangpan, a centerpiece that looks like a pavilion ornamented with small, colorful lanterns and long strings of knotted decoration, is also decorated with lotuses and other flowers.

Kim recreated the work based on two paintings of royal banquets in the collection of the National Museum of Korea - one depicting a party held by Prince Hyomyeong at Changdeok Palace for his father King Sunjo in 1829 and the other of a banquet thrown by King Heonjong in 1848.

The two paintings elaborately depict scenes of dancers, musicians and royal servants working at the parties, in addition to a variety of royal symbols and decorative objects. Kim also referred to an old drawing from “Uigyedoseol,” a guidebook of the royal and national ceremonies and rituals of Joseon, for precise details of the table, including its size.

It took another three years for Kim and students at the Kim Eun-young Traditional Korean Knots Institute to reproduce the jidangpan. This and other works were displayed at the institute’s “Ornamental Knots for Royal Banquets Decoration” exhibition at the National Palace Museum of Korea in Seoul on Sept. 7-20 this year.

Kim’s enthusiasm for reproducing historical maedeup derives from the rich cultural legacy of her close family. Her father was the late poet Kim Kwang-kyun (1914-93) and Kim is the wife of artist Jeon Seong-u, owner of the Gansong Art Museum. Gansong is the oldest private museum in Korea and was founded by Jeon’s father, the late Jeon Hyeong-pil.

The elder Jeon was known to purchase artifacts to prevent them from being taken to Japan during that country’s colonial rule of Korea from 1910 to 1945. Located in Seongbuk-dong, northern Seoul, the museum boasts the finest private collection of Korean art in the country, including 14 pieces designated by the government as National Treasures and another 12 as Treasures.

Kim majored in applied arts at Ewha Womans University in Seoul and started studying knot making in the 1960s with Kim Hee-jin, a pioneering artist who contributed much to the recovery of maedeup. Prior to that, the craft was becoming a dying art in the aftermath of the social turmoil of the first half of the 20th century.

Since then, Kim has won many awards at major national craft contests, as well as held numerous group and solo exhibitions, including shows in Japan, France, Italy, the United States and Canada. Her maedeup works are on display at the Victoria and Albert Museum in London, the National Museum of Oriental Art in Rome and the Seattle Asian Art Museum. During an exhibition at the Smithsonian Museum in Washington last year, she gave public demonstrations of knot making.

Kim is currently collaborating with designer Ha Ji-hun, a professor at Chugye University for the Arts, to produce furniture that features knots and other traditional Korean craft designs.

“We want to create a national brand of furniture, using the old techniques to design furniture for modern use,” she said.

The artist said that modern Koreans, and more so foreigners, tend to regard maedeup as a form of traditional art suitable only for women’s accessories, such as pendants called norigae. However, maedeup was so extensively used in traditional Korea that everyday life was almost impossible without it, she said. “Knots were not simply for decoration and ornaments but part of life,” she said.

Traditional knots in Korea, Japan and China are based on similar techniques, Kim said, but their use in Japan and China was much more limited than in Korea. Numerous relics and documents from ancient Korea testify to the extensive use of knot craft in everyday life and rituals in Korea. Maedeup came to be widely used for a variety of everyday objects during the Joseon Dynasty, in particular. Demands for the braids and tassels used for tying the knots was so great during the Joseon period that an entire village was devoted to their production.

Kim said the art of maedeup is difficult to master. The knotting process starts with the dyeing of silk threads, and only natural materials are used for this. The dyed strands are then twisted and wound around a frame to make a braid. There are about 40 basic ways of knotting and one characteristic of maedeup is that each piece looks the same from both front and back.

Kim established her institute in 1977 to pass on her skills to younger Koreans, and has held 10 group exhibitions so far.

“I always thank my students for learning this difficult skill,” she said.