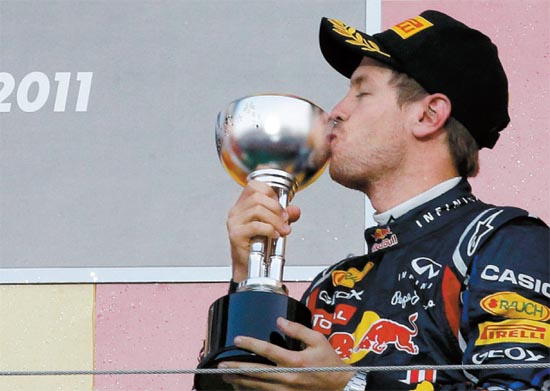 Red Bull Formula One driver Sebastian Vettel of Germany kisses the trophy after finishing third during the award ceremony of the Japan Formula One Grand Prix in Suzuka, Japan, on Sunday. [AP/YONHAP]

Button, who started from the front row alongside pole-sitter Vettel, took the checkered flag at Suzuka circuit for his third win of the season, finishing just 1.160 seconds ahead of Ferrari’s Fernando Alonso.

Vettel needed just one point to wrap up the title or for Button not to win the race. The 15 points he earned for third was more than enough to allow the 24-year-old German to become the sport’s youngest two-title winner at age 24.

“We’ve had a long year, a fantastic year,’’ Vettel said. “Today’s race was difficult. We weren’t as fast as we wanted to be on the soft tires but it was a strong result to win the championships and I want to thank the team.’’

The German’s voice cracked as he spoke over the radio to team boss Christian Horner on his way back to the pits, but when he got there he was all smiles, running to the outside of the pit wall where he was mobbed by his team members in jubilant celebrations.

Vettel briefly challenged Alonso for second with 10 laps to go but it didn’t make sense for him to take any risks knowing he had the championship wrapped up with a third-place finish. He finished 2.006 seconds behind Button.

Vettel and Button nearly collided on the run to the first corner. Vettel got a slightly tardy start and cut hard to his right to block Button, who was forced to slow and put wheels on the grass verge to avoid contact.

Button could be heard over his team radio saying “He’s [Vettel] got to get a penalty for that’’ but stewards reviewed the footage and elected not to punish the Red Bull driver.

After the race, as the top three drivers prepared to walk out on the podium, Button asked Vettel “Didn’t you see me at the start’’ and Vettel said he was within his rights to defend his position because he was ahead, not alongside.

Vettel held the lead until the second round of pit stops after lap 20 when Button got out ahead, and led Vettel, Alonso and Webber for rest of the race.

“This circuit is very special,’’ Button said. “We love this place and it was great to get a win here. I want to thank the team. The improvements that they did to the care were impeccable.’’

The ongoing feud between McLaren’s Lewis Hamilton and Ferrari’s Felipe Massa continued in Sunday’s race. The two drivers made contact at the chicane when Hamilton cut in front of Massa. Minor parts were sent flying as the front tires of both cars made contact.

The two had a collision at the Singapore Grand Prix two weeks earlier and Ferrari’s Massa lashed out at Hamilton, saying the McLaren driver endangered other drivers with reckless driving. Race officials investigated the incident but no further action was taken.