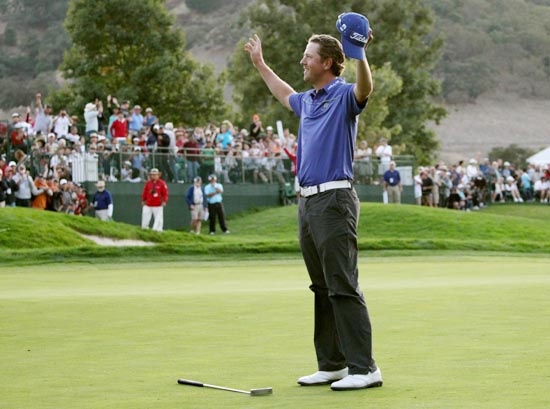 
SAN MARTIN, California - Bryce Molder won the Frys.com Open after the longest playoff this year on the PGA Tour.

Molder made a six-foot birdie putt on the sixth extra hole Sunday at CordeValle to outlast Briny Baird and capture his first Tour victory in his 132nd attempt.

Tiger Woods managed to make news when a fan ran toward the seventh green as he was putting and tossed a hot dog in his direction. The 31-year-old man was arrested and never came close to Woods.

It was the 17th playoff this year on the PGA Tour, setting a record dating to the modern era that began in 1970.

Baird looked like he had won it when he chipped in from just short of the 17th green for an eagle to take a one-shot lead. In the group ahead of him, Molder rolled in a 12-foot birdie putt on the 18th to close with a 7-under 64, which got him into the playoff.

They finished at 17-under 267, and then looked as though they would never finish.

Bud Cauley, the 21-year-old who turned pro this summer, shot 66 and finished third to earn $340,000, which looks as if it will be enough for him to earn a card next year without having to go through the qualifying tournament.

It was the second straight week that a player won for the first time after a long drought. Kevin Na won in Las Vegas after 210 tries. Molder was regarded as a sure thing when he left Georgia Tech as a four-time All-American, but nothing comes easily on the PGA Tour. And as he found out in fading sunlight, nothing comes easily in a playoff.

On the fourth extra hole, Molder drove into a hazard on the 18th. He hammered out a shot to the front of the green and hit a beautiful lag from 80 feet to escape with par.

“It wasn’t an easy shot. It certainly wasn’t heroic,’’ Molder said. “I knew if I could get a decent club on it, it would go somewhere where I was looking.’’

Woods had three rounds in the 60s for the first time in more than a year on the PGA Tour, although he finished 10 shots behind in a tie for 30th. In a year lost mainly to left-leg injuries, it was his ninth and final Tour start.

Cauley left Alabama this year to turn pro, and it appeared to be a smart decision. He is projected to be the equivalent of 114th on the money list with two tournaments remaining. He at least gets into the McGladrey Classic next week. Cauley would be only the seventh player since 1980 - and the first since Ryan Moore in 2005 - to earn a full PGA Tour card without ever going to qualifying school.

Cauley was among five players tied for the lead at some point in the final round. As usual at CordeValle, this tournament was always going to be decided over the final four holes, which offer two eagle possibilities with the par 5 No. 15 and the tees moved forward on the 17th, making it 284 yards over the water.

Shane Bertsch surged into the lead with an eagle on No. 15 to reach 15 under, only to miss a short putt on the next hole. He failed to make another birdie and tied for fourth with a 64. Ernie Els also tied for fourth. He went bunker-to-bunker on the 15th and had to settle for par and closed with a 68.