Park sees Grand Prix as more than just a race

Park sees Grand Prix as more than just a race 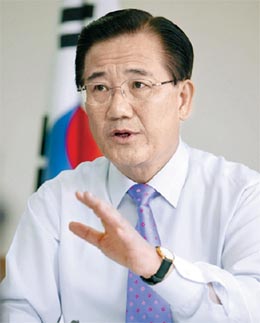 There are those under the impression that motor sports aren’t popular in Korea. But Park Joon-yung, South Jeolla governor and chairman of the Korean Grand Prix organizing committee, is confident that Formula One will pave the way for the Korean motor sports industry and benefit the car industry as well.

Park acknowledged that there were some bumps in the road in last year’s event and that they are still dealing with financial issues, but the 65-year-old governor believes that the Korean Grand Prix will move his home province toward a better future and further escalate the brand of Korea, boosting tourism for the country.

The Korea JoongAng Daily had an interview with Park on Monday to hear his thoughts on this year’s F1 Korean Grand Prix.


Q. How far along is the preparation work so far?

A. We are all set for the F1. First, the circuit construction has been completed. For the spectators’ convenience, we have checked facilities, transportation and accommodation as well. Since we also have achieved some success through marketing, I strongly believe that this year will be a successful event.

What are the differences between this year’s event and the previous one?

Last year, we had many difficult problems holding the very first F1 Korean Grand Prix. However, based on the experience and knowledge we gained last year, I am confident that the event this year will be much improved.

How many spectators do you aim to bring?

What plan do you have to help foreign spectators enjoy the event along with local spectators?

The Korean Grand Prix should not only be a sporting event. We should escalate this event to the level of other mega cultural events in Asia.

How do you respond to some people’s criticism that the Korean Grand Prix won’t last due to financial problems?

It is true that we are struggling in terms of profit because of the high investment and high cost structure at the first phase. However, we should be aware that none of the F1 host countries are free of the same problems. Instead, the F1 host countries look to the economic effect of F1, such as promoting their country’s brand value, increasing the number of tourists, development in the automobile industry, etc.

Do you have any plans to improve the financial situation?

Increasing profit is the number one priority for us at the moment. In order to do that, we will work on ticket marketing, sponsorship and using the circuit for the other national leagues as well. We will try our best to cut down the sanction and operation fees. Even though F1 is held in South Jeolla, all of Korea is represented in this event. We need the national government to support the race.

What else would you like to say to fans who are waiting for the Korean Grand Prix?

In spite of the difficult circumstances, we have been doing our best to prepare for the F1 Korean Grand Prix. Now, all we care about is a successful result.