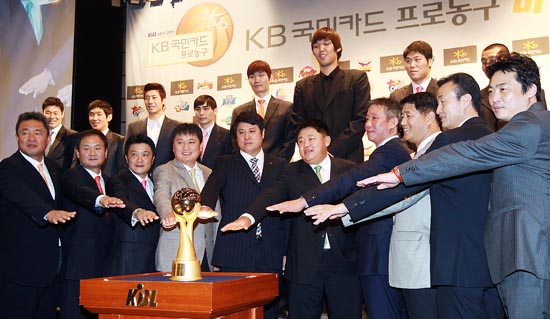 Coaches and players from the 10 KBL teams pose in front of the KBL trophy during their Media Day event on Monday. [YONHAP]


The new season of the Korean Basketball League (KBL) begins its six-month journey tonight with a notable rule change that may affect teams’ performances throughout.

The 2011-2012 men’s professional basketball season opens with a game between Jeonju KCC Egis and Seoul SK Knights at Jeonju Gymnasium in Jeonju, North Jeolla at 8 p.m. tonight. The 10 teams in KBL will play 54 games each until Mar. 24 next year and will go through a six-team playoff to determine the winner.

This season, teams are only allowed to have only one imported player while last season teams could sign two foreign players, but only have one foreign player on the court at a time.

The rule change means that if an imported player gets injured or suspended, the team might not have another foreign replacement, which could be a huge blow. Pundits are saying that the teams need to keep their foreign player away from injury as well as foul trouble during the game.

“If a foreign player picks up an injury, that team’s whole season will be ruined,” Ulsan Mobis Phoebus coach Yoo Jae-hak said at the KBL Media Day press conference on Monday. “I think most imported players are at the same level, but the key is who will be the first one to adjust to Korean basketball.”

On the bright side, the rule change on imported players means more opportunities for Korean players on the court. It also means that teams who are more organized with their Korean players will have an advantage against other teams.

While last season’s two top finalists, Egis and Wonju Dongbu Promy, are still considered to be championship contenders, pundits are predicting that Anyang Korea Ginseng Corporation (KGC) could snatch the crown because the team will benefit most from this rule change.

In fact, at the Media Day event, six coaches from the 10 KBL teams pointed to KGC as potential champions.

“KGC has rebuilt the team very well,” Busan KT SonicBoom coach Jeon Chang-jin said. “I really want them to win the league, so that fans can realize that the league is not only about KCC and Dongbu.”

KGC finished ninth last season with 16 wins and 38 losses but during the offseason the team drafted Chung-Ang University center Oh Se-keun and also signed Rodney White to strengthen their presence in the paint.

Oh, 24, is widely considered as the best candidate to win the Rookie of the Year award, while 31-year-old White has plenty of experience in the NBA and other foreign leagues.

Along with these two big men for KGC, point guard Kim Tae-sool and forward Yang Hee-jong have rejoined the team after finishing their military duties. Last year’s Rookie of the Year, Park Chan-hee, is also ready to play.

“My contract ends this year with KGC and other coaches are really giving me pressure,” KGC coach Lee Sang-beom joked during the Media Day event. “But I won’t lie that our roster depth is solid enough to rotate 10 players [on the court].”

The Orions will have a fresh start in Goyang, Gyeonggi after moving from Daegu in June. The team appointed former MBC analyst Chu Il-seung as their coach and brought in Chris Williams, who claimed two KBL championship rings back in 2007 with the Phoebus, to boost their attack.

“A lot of Korean players will improve their skills this season,” Incheon ET Land Elephants coach Yoo Do-hoon said. “I believe teams will present exciting basketball to fans this season.”