Koreans safe and educated but not terribly happy

Koreans safe and educated but not terribly happy


Park Min-ki, a college senior in Seoul, has submitted 18 résumés to different companies throughout the city. For most of them, he made it through the application phase of the hiring process but failed in the interviews.

Park, an agriculture economics major, has been receiving student loans to attend college ever since he was a freshman. He has to work part time at a restaurant every day for 4,500 won ($3.84) per hour in order to pay his rent for a small room, which costs 250,000 won per month.

“Students like me who are not supported financially by their parents suffocate from the reality,” said Park. “I barely pay for my room and other living expenses but I am accumulating debt at the same time by receiving student loans.”

Park said unless he gets employed at a large conglomerate that pays a high salary, he won’t be able to save enough money to get married. 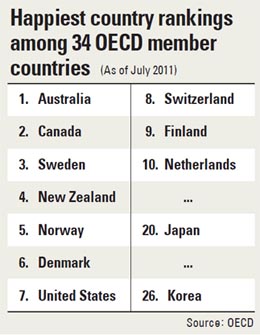 “I’ve been miserable since two years ago when I realized that I have a lot on my shoulders,” said Park, who is writing his 19th curriculum vitae. “This country being included in the top-10 largest economies doesn’t mean much to me. I’m just struggling here every single day.”

Korea is often cited as the most rapidly developing country in the world. Korea’s economy has seen an astronomical rise, with gross domestic product based on purchasing power parity (PPP) per capita jumping from $2,300 in 1980, only about one-third of nearby developed Asian countries including Japan and Singapore, to $30,000 last year, according to the International Monetary Fund.

The country has become the seventh- largest exporter and tenth-largest importer in the world. Seventy-nine percent of adults aged 25 to 64 have earned the equivalent of a high school diploma and the average student scores 539 out of 600 in reading ability, which is the strongest performance in the OECD, according to the latest PISA student-assessment program.

Meanwhile, Korean people work 2,256 hours on average per year, much higher than the OECD average of 1,739 hours and the highest rate in the OECD. Sixty-five percent of people aged 15 to 64 have a paid job.

Last year 15,413 people committed suicide, which averages to about 42 people taking their own lives every day. The country, which also has the highest suicide rate among OECD member countries, ranked low in areas such as housing, community networks, income, environment, health, life satisfaction and work-life balance, according to a new survey recently released by the OECD.

Thirty-four member countries were evaluated in this index and Korea ranked 26th.

One of the distinctive findings by the OECD’s Better Life Index was Korean people’s lack of confidence in their personal social networks. In Korea, 80 percent of people believe that they know someone who they could rely on in a time of need, only one percent above Turkey, which was the lowest.

Korea’s annual inflation, reported last month, was at 4.3 percent, according to Trading Economics, a level that is putting pressure on household incomes as well as wage demands.

“I think the cost of living has gone up a lot more in proportion to my paycheck,” said Park Mun-kyu, 34, who works at a trading company in Seoul.
“My wife and I have to scrimp and save in order to send our children all the way through to college. Such life can never be satisfactory.”

Moreover, Korea’s total fertility rate in 2009 was the lowest in the OECD, at 1.15 children per woman. In addition to the low fertility rate, the female employment rate was also low at 52.2 percent in 2009, well below the OECD average of 59.6 percent.

“Long working hours result in lack of socializing after work with families, and short leaves make it difficult for parents to juggle both work and family life,” said Lee Su-kyung, 32, who had to quit work at a pharmaceutical company, after giving birth to her second daughter early this year.

“When I realized nearly 70 percent of my income was going straight to a monthly fee for my four-year-old daughter’s day care so that I could work, I lost the passion to work, which I used to enjoy so much.”

Addressing the poor working environment for women, and in attempt to raise the birth rate, the Korean government has been making efforts to enact bills related to the issue including a “law related to equal employment opportunity that supports both work and family,” which was drawn up by the Ministry of Employment and Labor.

The legislation will take effect from December of this year.