Part of Bieber’s Christmas album sales to go to charity

Part of Bieber’s Christmas album sales to go to charity 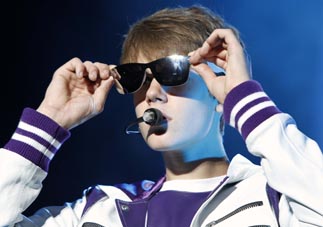 NEW YORK - Justin Bieber is in the holiday spirit: The singer is the first artist on the Universal Music roster to have part of his album sales benefit charity.

Partial sales from “Under the Mistletoe,’’ his Christmas album that is out Nov. 1, will go to various charities, including Pencils of Promise and the Make-A-Wish Foundation.

“Universal never actually allowed money from the album to go to charity, so it’s kind of a unique thing and I’m very happy and proud of what we’ve done,’’ the 17-year-old said in an interview from Lima, Peru, on Monday. Universal Music Group is the parent company to labels like Interscope Records and Island Def Jam Music Group. Its roster includes Eminem, Rihanna, Kanye West and Lady Gaga.

Bieber said he isn’t sure how much of the sales will go to charity, but thanks his team for helping him achieve his goal of wanting to help others during the holiday season.

“I tell them basically what I want and they kind of go and help me get it done,’’ said Bieber, who will also donate money to various food banks.

“Under the Mistletoe’’ features collaborations with Mariah Carey and Boyz II Men, among others.