The opening ceremony for the 16th annual Busan International Film Festival was held in the outdoor venue in front of the new Busan Cinema Center in Haeundae District, Busan. [YONHAP]


BUSAN - When a small film festival opened at an outdoor market in Nampo-dong, Busan, during the mid-90s, few expected it to make a mark in the industry amid more prominent competition in Asia. Back then, the Asian festival circuit was based mostly on two strongholds - the Tokyo International Film Festival, located in the second-biggest film market on the globe, and the Hong Kong International Film Festival, located in the world’s fastest-growing film market. Coming almost 10 years after Tokyo and 20 years after Hong Kong, the Busan festival was challenged not only because of these bigger events but also because of the insignificant size of the Korean film industry. Back then, Korean films made up less than a quarter of screenings, even at the local box office.

The festival’s beginnings were humble to say the least. Spread out in two areas, Nampo-dong and Gwangbok-dong, the first event screened 169 films in dingy, rented theaters.

“Since I live in Busan, I attended the festival without much thought. Actually, during the 1998 festival, my first priority was going to Nampo-dong Market to eat their famous odeng [fish skewers],” she said, laughing.

“I had no idea that the festival, held in a little known country, had the potential to become what it is today. I’m really proud to see how it has grown,” Ahn, now a festival regular, said as she waited in line to buy a ticket on the day after the festival opened.

The small festival that began 16 years ago with a mere 30 million won ($26,400) in start-up funds from the Busan city government has since grown into a global event worth over 10 billion won and has firmly positioned itself as the continent’s biggest film festival.

The tally for theater visits during the nine-day festival this year was 196,177. Almost every major wire service from Korea and overseas, as well as newspapers and industry magazines, were present, with 2,440 press members in attendance this year. Tickets for the opening film “Always,” starring So Ji-sup and Han Hyo-joo, sold out online after seven seconds.

In addition to showcasing hundreds of films, the festival also plays a crucial role in bringing global attention to the Korean film market by hosting sleek industry events to entice buyers and distributors.

This year, the festival screened 307 films from 70 countries. The tally for premieres - which is often a key indicators of a film festival’s prominence and scale - was 89 world premieres and 46 international premieres.

Prior to its opening, the festival underwent some of the biggest changes in its 16-year history in a bid to keep its top spot in the Asian cinema market. First, it adopted a new name, changing the name of the city in its title from Pusan to Busan to reflect the government’s romanization system.

Kim Dong-ho, the festival’s director since its inception, retired last year, and Lee Yong-kwan has taken over.

The biggest physical change was the opening of the Busan Cinema Center, a huge 30,000-square-foot venue in the Haeundae District that cost more than $150 million and will serve as the festival’s permanent home. Designed by Austrian architectural collective Coop Himmelb(l)au, the striking new venue has an LED-covered roof and a 4,000-seat outdoor screening facility. According to Hur Nam-sik, Busan mayor and BIFF chairman, the complex symbolizes “the opening of a second chapter for BIFF.” 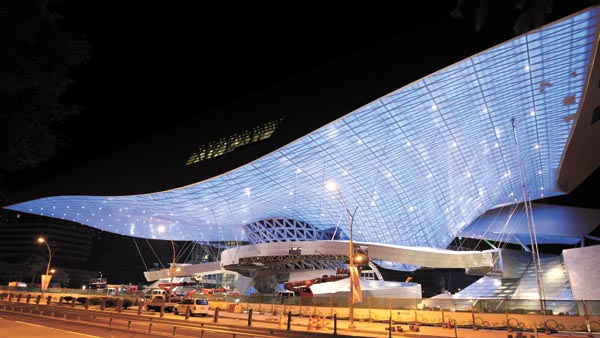 The newly built Busan Cinema Center in Busan’s Haeundae District has an elaborate, LED-covered roof resembling a pair of wings.

While the festival has managed to hold on to its top position in Asia in terms of the number of world premieres and visitor volume, organizers and industry experts agree that it still has a way to go before catching up to the Tokyo and Hong Kong festivals in terms of market activity and film sales, with the Hong Kong Film Market in the lead in Asia in those categories.

To bolster its position, this year’s Asian Film Market shifted location to the roomier Busan Exhibition & Convention Center, leaving behind a smaller hotel venue. This allowed the market to increase the number of exhibition booths to 109, from 51 last year.

Attendance also jumped this year to 1,080 industry personnel from 789 a year before. Although this is a festival record, experts say the festival needs to catch up fast in order to compete with up-and-coming Asian festivals like the newly launched Beijing International Film Festival, which receives hefty support from the government.

“As a film festival, BIFF has become huge,” said Sue Kim, a researcher at the Film Research and Development Center, under the Korean Film Council. “But as a ground for film market transactions, BIFF is still the underdog amid bigger festivals in Asia and Europe.”

Kim said that in previous years, the Asian Film Market, now in its sixth year, was rather overlooked by buyers who went instead to the bigger American or Tokyo markets, which are held during the same season.

“Filmmakers and audiences appreciate BIFF, but in terms of brand value, it is still early to say the festival is one of the world’s best,” she said. “Festivals like Cannes don’t need to invite buyers. They come willingly. For Busan, we have to personally invite them to participate in the market because we are a smaller name.”

Still, the Korean film market has had remarkable growth since the early years of the festival.

“The biggest contributor to the festival’s growth and prominence over the years is the growth of the Korean film industry itself,” Kim said.

But with the Asian Film Market growing in scale this year, experts are optimistic about its future. The market has grown by 30 to 40 percent, according to industry estimates, with the participation of new companies, including four from Iran, this year. 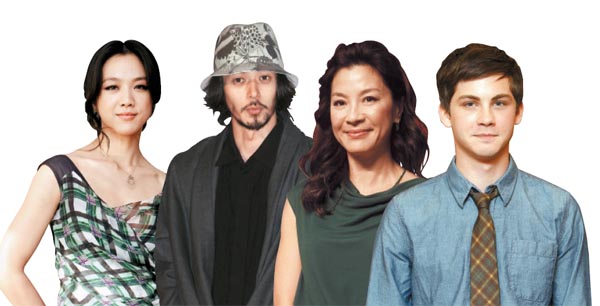 From left, actors Tang Wei, Joe Odagiri, Michelle Yeoh and Logan Lerman were just some of the luminaries who attended this year’s BIFF.


Young and edgy is key for BIFF

The Busan festival’s edge over its rivals has always been its focus on up-and-coming talent and films from more obscure regions of Asia, according to Kim Ji-seok, head programmer for this year’s festival. He also points to offbeat programs such as this year’s “Asian Western: Men of the East,” which featured Western films produced in Asia.

“When we think of Western films, it’s not often that they are connected to filmmakers from Asia. But in fact, Western films have been made in Asia for more than 60 years,” Kim said. “These sorts of programs keep the festival more youthful. When you go to festivals like Cannes, most participants are older and more experienced, but at BIFF, the audience and staff are young and full of energy.”

As a noncompetitive festival, BIFF’s focus on young talent is demonstrated through its most important award, New Currents, which is given to first- or second-time Asian filmmakers and comes with a $30,000 prize. This year, the award went to Iran’s Morteza Farshbag for his film “Mourning” and Filipino filmmaker Loy Arcenas for “Nino.”

Festival organizers also say, however, that for a festival of its size, balance is key in attracting both the public and industry representatives.

“If we push only artistic sensibility, we might be in danger of alienating audiences,” Kim Ji-seok said. “Through our programs, we want to be able to strike that delicate balance between showing something new and being accessible.”

During a festival press conference, director Lee Yong-kwan expressed a desire to maintain the festival’s aura of youth and excitement while keeping the program balanced with both art-house films and bigger budget films.

“I want to take the excitement of other noncompetitive film festivals such as Toronto and Rotterdam and combine it with the level of quality and talent scouting of festivals like Cannes,” he said.